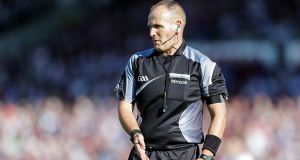 Referee Conor Lane will be in charge for this year’s senior football final. Photograph: Laszlo Geczo/Inpho

Cork’s Conor Lane has been confirmed as the referee for the All-Ireland senior football final between Dublin and Tyrone.

Sean Hurson from Tyrone will be the man in the middle for the All-Ireland minor final as Galway look to halt Kerry’s pursuit of five in a row.

This will be Lane’s second senior final to officiate. The Banteer/Lyre club man was in charge for the 2016 final between Dublin and Mayo. That final ended in a draw, with him showing six yellow cards and one black card to James McCarthy.

Lane has also refereed the 2013 minor final between Mayo and Tyrone, that year’s senior Connacht final (and again in 2016), and the club All-Ireland final in 2016 which Dublin club Ballyboden St Enda’s won.

He’s also refereed Division 2 and 3 league finals. While in this year’s Championship, he refereed the Super 8 clashes between Galway and Monaghan, and Dublin and Donegal. The Connacht quarter-final between Galway and Mayo, the Ulster semi-final between Fermanagh and Monaghan. As well as the qualifier matches between Carlow and Tyrone, and Fermanagh and Kildare.

His umpires on Sunday week in Croke Park will be John Joe Lane and DJ O’Sullivan both from his own club, and Ray Hegarty (Bride Rovers) and Pat Kelly (Kilshannig).

Meath’s David Gough will be the standby referee. The other linesman is Paddy Neilan (Roscommon) and the sideline official will be Sean Laverty (Antrim).