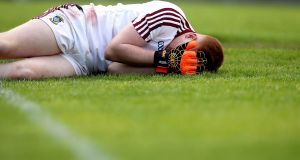 Westmeath goalkeeper Kevin Fagan can’t hide his disappointment after spilling the ball into his own goal. Photograph: Ryan Byrne/Inpho

Armagh replicated their qualifier victory against Westmeath at the same venue last summer with a comfortable win on Saturday evening in Mullingar, after which Colin Kelly resigned as Lake County manager after just one season in charge.

Armagh started brightly with a point from Ethan Rafferty after a mere 11 seconds before Andrew Murnin got in on the action scarcely a minute later. However, Westmeath pounced for an opportunist goal in the fourth minute when their most consistent forward Ronan O’Toole found the net following good work by John Connellan.

An injury-time brace from Rory Grugan - his fourth successful free - and Jemar Hall with a delightful finish put the Orchard County ahead by 0-11 to 1-4 at the interval.

There was a long delay shortly after play resumed as Armagh’s Rafferty was treated for a bad shoulder injury.

Westmeath’s hopes were dashed further in the 43rd minute when Westmeath goalkeeper Kevin Fagan - who had been solid under the high ball up to that point - spilled a shot from Andrew Murnin over his own goal line.

Armagh copper-fastened their place in the second round draw with an opportunist goal from sub Anthony Duffy in 64th minute, after his initial fisted effort had come back from the upright. And another sub soon got in on the goal-scoring act, Gavin McParland giving Fagan no chance from close range.

The home team finished the game with 14 men when Ger Egan picked up a second yellow card in injury-time.