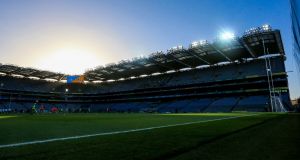 Cavan have no issue with playing Dublin at Croke Park in the All-Ireland football semi-final. Photograph: Bryan Keane/Inpho

The Cavan county board have outlined their absolute agreement to play their All-Ireland football semi-final against Dublin in Croke Park next Saturday week, claiming they never did, nor would, seek a change of venue.

In a statement released on Wednesday afternoon, the board said they “would like to clarify that they absolutely and categorically have never considered, nor, have they any intention of applying for a venue change for the upcoming All-Ireland semi-final fixture.

“We are honoured and look forward to playing the All-Ireland semi-final as is fixed by the CCC.”

It follows several mixed messages on the matter, although Cavan star Thomas Galligan was crystal clear in his intent in an interview on Tuesday.

“If you make it there, you’ll make it anywhere,” said Galligan, not quite singing it, and yet not falling for the old sorry tune either about playing All-Ireland champions Dublin in Croke Park, given the perceived advantages given over to what is essentially Dublin’s home venue.

“Nobody on our panel would mind where it’s played. We’ll play wherever – we could play it on the back street if we had to. If it’s in Croker we’ll play it. if it’s moved, that’s up to the GAA.

“I would have expected that it would be in Croker because there hasn’t been a semi-final played out of there in a long time. If it is played somewhere else, in Navan or somewhere midway, we’ll give it a go.

“I’d just expect it to be in Croke Park because it’s an All-Ireland semi-final,” Galligan says. “It would probably help us if it was out of Croker. Ah, it’s not up to us to make a call on that, the GAA will make a call on that. We’ll play wherever. At this stage we were meant to be long beat, so we’ll go out and give them a go.”

Speaking in the still glowing aftermath of their Ulster final win over headline acts Donegal, delivering Cavan’s first provincial title since 1997, Galligan admitted the matter hadn’t even been addressed yet by either the players or their manager Mickey Graham.