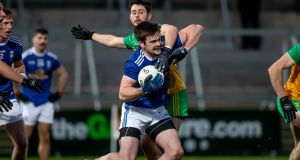 Thomas Galligan doesn’t exactly specify which backstreet he’s talking about, but his point is no less crystal clear in intent: Cavan are not particularly bothered where they play Dublin in their All-Ireland football semi-final, not when being there is so entirely satisfying in itself.

If it means Croke Park, under lights, on the first Saturday evening in December, then please bring it on.

“If you make it there, you’ll make it anywhere,” says Galligan, not quite singing it, and yet not falling for the old sorry tune either about playing All-Ireland champions Dublin in Croke Park, given the perceived advantages given over to what is essentially Dublin’s home venue.

“Nobody on our panel would mind where it’s played. We’ll play wherever – we could play it on the backstreet if we had to. If it’s in Croker we’ll play it. If it’s moved, that’s up to the GAA.

“I would have expected that it would be in Croker because there hasn’t been a semi-final played out of there in a long time. If it is played somewhere else, in Navan or somewhere midway, we’ll give it a go.

“I’d just expect it to be in Croke Park because it’s an All-Ireland semi-final. It would probably help us if it was out of Croker. Ah, it’s not up to us to make a call on that, the GAA will make a call on that. We’ll play wherever. At this stage we were meant to be long beat, so we’ll go out and give them a go.

“Look, they’re well used to playing there but I think everyone loves to play and wants to play in Croker. I don’t think anyone would be disappointed if we had to play it in Croker because growing up that’s exactly where you want to play. You want to be playing the best team in the country in Croker. If you make it there, you’ll make it anywhere.”

Speaking in the still-glowing aftermath of their Ulster final win over headline acts Donegal, delivering Cavan’s first provincial title since 1997, Galligan admitted the matter hadn’t even been addressed yet by either the players or their manager Mickey Graham.

Cavan only regrouped for the first time on Tuesday night, with the Dublin semi-final showdown on Saturday week expected to be fixed for Croke Park. Galligan was still nursing two stitches over his right eye as an added souvenir of Sunday’s landmark win, and in the meantime he suggested no one on the team would be calling on the GAA seeking a more neutral venue.

However, Galligan did drop the hint that Dublin might be a less daunting prospect outside of GAA headquarters, particularly given Dublin’s latest demolition run through Leinster, leaving them just two wins away from a sixth successive All-Ireland.

“I suppose it’s a little bit daunting but it’s also exciting. You’re playing the best team in the country and you’ll really know where you’re at when you play them.

“There might be a bit of ‘daunt’ or whatever, but more people will be excited to get playing them. If you said at the start of the year that Cavan would be in an All-Ireland semi-final you would have gotten good odds. I think we’ll enjoy it more so than be afraid of it.”

Cavan will also relish being underdogs, something which Galligan admits spurred the team immensely in their win over Donegal on Sunday.

I don’t think I’ve taken it fully in yet, that we won, because no one expected us to win

“And I don’t think I’ve taken it fully in yet, that we won, because no one expected us to win, and everyone was saying all week we’re just a warm-up game to play Dublin, they’ll sort a few things out, be ready to play Dublin. So it’s still all a bit surreal at the minute.

“Even not having the fans, or going to pub to meet people, you can’t do that, get the pat on the back like you normally would, but no one can take it away from us.”

“There’s no pressure on us now, we’re going out and playing football. The favourites tag probably weighed heavy on Donegal the other night so hopefully it’ll do the same to Dublin.

“If Cavan supporters were there they’d give you that extra step, make you make that extra run or put in that tackle. You can’t belittle the amount of time and effort that the fans give to the GAA and to the team. Realistically, that’s why we’re playing as well, to try and do them proud.”