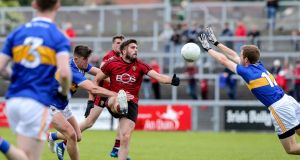 Finishers is the term England rugby coach Eddie Jones coined, when introducing his substitutions in the final quarter of a match to claim the spoils.

Down manager Paddy Tally may have copied that template to perfection with a five point tally from his bench in their slow burning round round one qualifier victory over Tipperary.

Cory Quinn’s three point cameo was the greatest of the bench contributions, his points came either side of a Donal O’Hare goal.

‘Cory is a gifted player,’ Down manager Paddy Tally enthused, singling out the ace attacker for praise.

“He has the ability to do things that are a wee bit unpredictable and I think he showed that today. He always has that wee bit of composure to make things look that bit easier.

“I’m just delighted for Cory, He’s been doing it for years, even this year in various league matches he came on and made a big difference.”

Tally’s side were trailing to a Philip Austin goal at half time, but as the game wore on he reckoned as the game progressed, his troops didn’t want the season to end.

“I knew that,” he said. “We all knew that if we didn’t win today the next time we’d be getting together would be preseason in November. That would be unbearable to think you wouldn’t see each other for months. Especially when they have potential like they have.”

There’ll be no such reign for Kearns in Tipp however, as Down progress at his team’s expense.