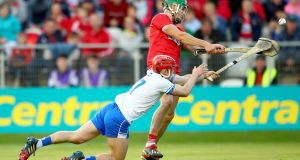 Cork’s 13-point win over Waterford in Páirc Uí Chaoimh on Saturday evening may be of assistance in terms of scoring difference next weekend, but manager John Meyler was pleased just to secure the win.

The Rebels needed a strong finish to eventually shake free of the visitors, who had already been eliminated. A tough test will await against Clare in Cusack Park next Sunday and Meyler is already looking ahead.

“It’s two points, that’s all, whatever we score,” he said.

“It was important to get the two points and we have them. We need a result in Ennis now to be in the top three, that’s our primary objective.”

After a week off for the Munster SHC a fortnight ago, last weekend was Cork’s bye round, leaving Meyler concerned beforehand.

“You lost the impetus of the Limerick game, we were on a high after that, and we probably lost that coming into tonight’s game” he said.

“I was worried we’d be rusty, and with what was going on in Waterford, but the lads really put in a performance, that’s the most pleasing aspect of the evening. Waterford threatened us and when we were up seven, eight points, they came back at us.

“In the first half and in the middle of the second half, they pegged us back, but what I liked when they got the goals was that we responded with points.”

Cork had a good start as Patrick Horgan’s early goal put them 1-1 to 0-0 ahead, but, despite rumours of upheaval in the camp, Waterford stayed with them for much of the first half, driven by Stephen Bennett’s placed balls while his brother Shane and Thomas Ryan might have had goals.

However, Alan Cadogan struck for a second Cork goal coming up to half-time and that put them 2-11 to 0-11 ahead at the break. Early in the second half, Stephen Bennett’s goal for Waterford cut the gap to three, but Cork replied with five straight points and when Shane Bennett struck to bring the margin back to four, 2-18 to 2-14, Cork pushed on again.

Subs Shane Kingston, Conor Lehane and Tim O’Mahony all had points as they had 13 to spare at the end, with 12 players scoring. That was another thing to hearten Meyler, given that Cork’s lack of depth has been a hindrance in the recent past.

“Aidan Walsh had a tremendous catch in the first half, then he faded a bit but we were able to put in Shane Kingston, who got three points,” he said.

“You saw the talent Waterford brought on, the likes of Austin Gleeson. You must have that strength in depth.”

They will look to push on but it’s the end of the year for Waterford after four defeats. However, their manager Páraic Fanning found some encouragement despite the result.

“We were looking first of all for a performance to do ourselves justice, last week we didn’t deliver the level of performance we’d expect ourselves.

“The lads were coming down looking for honesty of effort, which we got. When lads make their championship debut, you’d like to give them something to remember, a good performance and a win, that was the ultimate goal, to give them encouragement.

A review will ensue, and Fanning is optimistic that time for reflection will prove fruitful.

“There’s a bunch of lads in there who want to do the best they can, as do we as a management team. We know ourselves we’ve had a difficult championship, there are a few things that must be looked at, everyone will reflect now and find a bit of headspace. It does come thick and fast during the championship.”