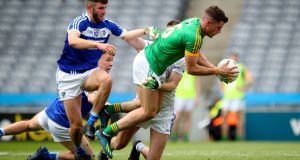 Meath’s Donal Keogan is fouled for a penalty by Graham Brody during his side’s win over Laois in Croke Park. Photograph: Ryan Byrne/Inpho

Back when Andy McEntee was playing for Meath, blazing a trail to the Leinster final in this manner - following a 3-13 to 0-11 win over Laois in Croke Park - would have marked the county out as serious All-Ireland contenders.

Unfortunately, there’s still a distance to go in that regard right now and, in truth, their chances of even ending their near decade long wait for a provincial title later this month look slim.

That’s what the Leinster championship has become these days - a race for second place - and Meath at least can call themselves the next best in their province after an impressive few months.

They’ve capped promotion to Division 1 of the Allianz league with three Championship wins, securing a first Leinster final place since 2014 - though their dubious reward is a date with Dublin.

The standout display, however, came from James Conlon who, on his first Championship start and two years after hitting a goal for St Colmcilles in the All-Ireland intermediate final at Croke Park, struck five points from play.

Allied to the experience and surety of a group that has been around for three seasons now under McEntee, Conlon’s young blood and eagerness to grab scores proved too much for Laois to handle.

“He has to develop other sides to his game as well as scoring but for a guy getting his first start in Croke Park, in such an important game, I think most fellas would sign for that return,” said McEntee of the 21-year-old’s five points.

Conlon will naturally be a marked man on Leinster final day, something McEntee said the player will just have to live with.

“That’s the deal, you show up well in games like this and people take note and he will find the next day a little more difficult,” said McEntee. “Every time you progress, the standard goes up.”

Whether or not Meath can raise their game to that next level, the one occupied by provincial champions like Dublin, remains to be seen.

In truth, the 11-point winning margin here flattered them and with almost 50 minutes on the clock they’d have happily accepted a win of any kind.

Meath had shaken off a slow start to lead by 2-6 to 0-7 at half-time thanks to goals late in the half by Menton and Newman.

Yet when Laois sprung Donie Kingston from the bench for Evan O’Carroll, who’d kicked four wides, it brought a spike in form and two Kingston scores after the restart left just three in it, 2-6 to 0-9.

According to John Sugrue, the Laois manager, it was in the subsequent minutes that his side blew it, failing to convert 1-2 by his estimation.

Laois had four goal chances in the second-half in total but failed to take any of them and only added two more points, and just one from play, after those Kingston scores.

Meath, in turn, picked off points from the ever lively Cillian O’Sullivan, Newman and the exciting Conlon to leave six in it before Menton grabbed his second goal.

If his first goal owed everything to O’Sullivan’s industry, he could take full credit for the second in the 61st minute as he accepted Shane McEntee’s pass and rifled a terrific effort to the top left corner.

“We can’t hide from that,” said Sugrue of the 11-point margin at the finish.

“We’ve got to take it on the chin and try to get ourselves back to the training ground and see can we go on a bit of a run in the qualifiers.”