Kieran Fitzgerald focusing on experience as he chases another Connacht title 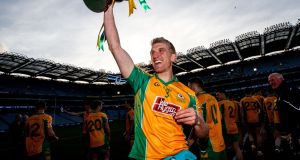 Kieran Fitzgerald was the first baby born anywhere in the country in 1981.

“Just after midnight,” he confirms. “My mother says that nowadays they get all the perks, she didn’t get much back then, to be honest.”

For many years Fitzgerald somehow felt old for his age, such as when playing with Galway in the 2002 All-Ireland Under-21 football final against Dublin.

“I remember going around in the parade thinking, ‘There’s nobody older than me here, this has to be some sort of an advantage.’ But yeah, that’s how it fell for me.”

Galway did win that title, but eventually that advantage waned – in perception at least. When he was marching around the parade with his club Corofin before their All-Ireland final win last March, he felt like one of the oldest players – in not necessarily a good way.

“Yeah, it’s gone the other way now, it’s not much of an advantage when you go to the latter stages of your 30s now. Experience maybe might stand you all right.”

Experienced indeed, and after winning his 14th Galway championship medal with Corofin, Fitzgerald is looking to add another Connacht title on Sunday when they face Padraig Pearses of Roscommon at Tuam Stadium. At age 38 he still feels willing and able.

“Yeah, fitness-wise I was in relatively good shape. This year as well, the longer we went on, there was championship at the beginning of May so there was only really a month break, and you don’t really stop now anyway. You’re always ticking over, doing something. Commitment-wise at home it suited as well, so the only issue would have been with regard to injuries and I’ve been relatively lucky in regards.

“Loads of people have commented on, ‘Oh, you’re whatever age and you’re still playing.’ I don’t see it that way. I enjoy it and I feel fit and I’m with a club that’s successful. You want for nothing. You just basically bring your boots and turn up and play football. Everything’s there. For me, I think there’s a lot more made of it outside of my group than within. There isn’t really much talk of it at all.

“And I suppose in my 30s, no disrespect to the inter-county and that, but my 30s have probably been my most enjoyable [he finished with Galway in 2011]. I found it very hard to stay fit injury-wise. The demands were huge. I had 11 years done at that stage. It was probably the best thing I did, to reset again and clear up a few knocks and niggles.

“Luckily I’ve had a good run since.”