Fabric of time: How a former Dublin hurler created a haunting image of Croke Park 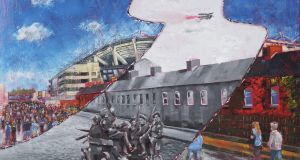 Transilience by David Sweeney: ‘I wanted a stark contrast either with the colour or the texture’

David Sweeney’s last appearance for Dublin at Croke Park came in the 2009 Leinster hurling final, against Kilkenny, before the curtain fell on his county career a few weeks later after defeat by Limerick.

“I really wanted to do well with Dublin and I came out of retirement for one year when Anthony Daly took over. That was a breath of fresh air and I was really sorry that I wasn’t younger when he arrived.

“Did I enjoy it? I enjoyed the challenge of playing for and representing Dublin, but it was hard getting beaten week in and week out.”

The stadium continues to loom large for him. It’s where he works, in the GAA’s e-learning department, and recent weeks have seen the unveiling of his haunting picture Transilience, which is the visual centrepiece of the GAA’s centenary commemoration of Bloody Sunday, which took place 100 years ago next November.

Immediate reaction to the title of the painting might be the temptation to dismiss it as pretentious or contrived, but although it’s an arcane word, the definition is 100 per cent apposite: abrupt change or jumping from one state to another.

They weren’t really sure what they wanted, but they didn’t want a bloody or gory image

That is literally what Sweeney’s painting does. On one level it’s a match-day scene of spectators heading up Jones’ Road towards the stadium,but the image is torn down the middle to reveal a panel in monochrome perfectly merging with the main image.

It’s of a military tender, carrying Black and Tan troops past the houses on Russell Street and down towards Croke Park, with all the menace that conveys to the contemporary audience, aware of what happened next in 1920.

Sweeney was approached at the end of last year by GAA Museum director Niamh McCoy and education and events manager Julianne McKeigue, a grand-niece of Michael Hogan, the Tipperary footballer shot dead on Bloody Sunday.

Already building a reputation as an artist, the former Dublin captain was commissioned to produce a painting for the centenary.

“I think Julianne contacted me because of the paintings I did from the Croke Park Skyline, taking in eight different angles on various parts of the city and houses.

“They weren’t really sure what they wanted, but they didn’t want a bloody or gory image. Something that could go up in the museum and would invoke the memory of the time and also involve community and locality. They gave me Michael Foley’s book The Bloodied Field, and I learned about all the other things that happened on the day.”

Foley’s award winning book from six years ago has become the foundation text of the commemoration and deals with the killing of 14 British agents in Dublin that morning as well as the reprisals in Dublin Castle later in the day.

In between, 14 football spectators would be killed by British forces in Croke Park at a Dublin-Tipperary challenge match.

Sweeney wanted to juxtapose portrayal of a contemporary match-day atmosphere with the sinister prelude to one of the most significant atrocities of the War of Independence. For the historical context he looked at the surrounding area.

“I spoke to a lady who lived in one of the houses beside Russell Street Bridge at the Jones’ Road intersection, and she confirmed that the houses were indeed there at the time.

“I did a study from the other end, looking towards North Circular Road with the crowds coming towards the ground, and I liked it because of the colours and the way the sun rises from the north side. They decided they wanted Croke Park in it and it wasn’t possible because of the sunlight to get the same colours, but I switched the view around. All told, I’d say it took three months.

People see Croke Park as such a happy place, so energetic and with so much going on

“I wanted a stark contrast either with the colour or the texture. I put this very textured gesso [an acrylic-style primer] onto the board so there were real distinct ridges in it. Then I scraped it away with a knife through the middle because I wanted the contrast between a smooth, monochrome 1920s and the vibrancy and excitement that goes around Croke Park now.

“People see it as such a happy place, so energetic and with so much going on, people going to a match with a sense of anticipation as opposed to a day when people went to the ground and didn’t come home.”

There is also some subtle detail in the image. Over the 1920 scene flies an old airplane, trailing a flare – regarded as the signal for the troops to move in on the stadium. Also, the contemporary crowd scenes feature understated colours to identify the jerseys as Tipperary’s and Dublin’s.

One major consequence of Foley’s book was to inspire the Bloody Sunday Graves project to restore the final resting places of the 14 victims. Another of Sweeney’s tasks was to sketch all 14 victims, including those who left behind no photographic images.

For those, he says, he referred to actors who portrayed them in a video about the events of the day.

His painting was partly inspired by hurling – or at least the need to replace his elite career with something.