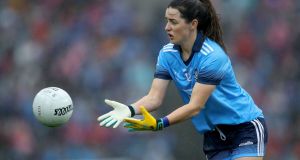 For Lyndsey Davey, Sunday, March 8th felt like a perfect day. In the afternoon she’d helped Dublin come back from seven points down to beat Waterford in the National League in Dungarvan, the home team featuring her cousin Dearbhaile Ni hAodha, before meeting up with more family at her aunt’s seafood restaurant Iasc in the town. What she didn’t know then, of course, was that another six months would go by without her kicking a ball for her county.

And this, she had already decided, would be her final year with Dublin, so if anything happens to push the rescheduled championship, due to start at the end of October, in to 2021, there’s a chance that that March day will prove to have been her swan song.

“But I always say if that was my last game for Dublin, it wouldn’t have been the worst to finish on,” she says. “It was a lovely day, so I have good memories. But no, you don’t want it to end like that. And hopefully it won’t.”

The Skerries Harps forward, who turned 31 last month, made her senior debut for Dublin as a 14-year-old and has been one of their leading lights ever since. “It’s been one hell of a journey,” she laughs, “a rollercoaster of highs and lows.”

It has too. She has played in nine All-Ireland finals, but lost five of the first six, Cork the tormentors in four of them. But her player-of-the-match performance in last year’s final sent Dublin on their way to a three-in-a-row, Davey subsequently collecting her fifth All Star, the county now setting the standard in the women’s game.

But since joining the Dublin Airport fire service in 2015, combining work and football has been a real challenge for Davey, not least those days when she has to go straight from a 12-hour shift to training. These past few months have, then, been a novelty, a rare experience of having some free time.

“In a way it has given me the chance to see what life after football might be like. My summers have always been filled with football and since I became a firefighter I’ve had shift work to contend with too. So, training, working, playing, you don’t actually realise how busy you are until everything stops. So, to be honest, it’s been enjoyable, just being able to have a bit of down time. Sitting on the beach for a couple of hours, going out on my paddle board, it was lovely from that point of view.”

The mention of paddle boards prompts her, with no little excitement, to recall one of the summer’s few good news stories, the rescue of the two paddle boarders in Galway.

As one of a group of GAA players who signed up as RNLI ‘ambassadors’ in 2017 and having worked with them since to promote their water safety message, Davey had a special interest in that story. And she and her family have a very personal connection to the RNLI after their work in recovering the body of her grand-uncle Michael Hayes back in 2012 after the trawler he skippered sank in rough seas off Cork, he and four of the crew drowning.

“There was such a massive effort over a few weeks to find all the bodies, which, thankfully, they did in the end. And that meant so much to the families, it gave them some kind of closure. So when the RNLI were looking for players to work with them, I didn’t hesitate, it’s my chance to give something back,” said Davey.

“It’s a perfect partnership, both the RNLI and GAA are made up of volunteers with such strong connections to their communities. There are 333 GAA clubs within a 10km radius of an RNLI station, so there’s such a wide audience that we can reach. In 2019, 105 people drowned in Ireland, so it’s all about getting those figures down by spreading water safety advice.

“One of our campaigns is ‘Float To Live’ which is about trying to avoid that natural urge to panic. And that was the amazing thing with the two girls, how calm they stayed. And that allowed them make smart decisions, like tying their boards together. If they had they been separated they would have been much harder to find. They had their flotation devices as well, which is essential when you’re going out on the water. You should bring your phone too, put it in a dry case. Be smart, have your wits about you, just be aware that things can change in an instant.”

While she’s not promoting one emergency service, she’s working for another, Davey realising a childhood ambition when she joined the fire service having previously worked in the finance department in Croke Park.

And while most people’s working life has been impacted since March, Davey’s hasn’t changed, even if Dublin Airport had been eerily quiet for a spell. “There was a massive drop in footfall all right, it was a strange time, but initially there were repatriation flights coming in, Aer Lingus flights from China with the PPE, and cargo planes, so from that aspect our day to day job didn’t change – once there are flights, we’re there for fire cover.

“Part of our job too is to keep the runway clear for aircraft to land. That involves wildlife management because there’s a lot of land around the airfield so there are lots of hares, birds, and so on. If a hare gets hit by an aircraft the carcass will attract other wildlife, birds especially being a hazard for aircraft, so we go in and clear it up straight away. It’s definitely a totally different side to the firefighting,” she laughs, “but I love being on the airfield, you never know what’s going to happen.”

And lest she hadn’t enough to be doing, Davey is starting paramedic training this month. That, she hopes, will coincide with a return to training with Dublin on September 14th.

“That’s what I’ve missed more than anything, that lack of contact with the players. We’ve been doing our Zoom meetings, our gym sessions online, cook-offs with the nutritionist, quizzes, all that, the management was really creative in keeping us all in contact. But nothing would beat actually getting back out there together.

“I always intended this being my last year, but we know at any moment the season could be pushed back again. If that happens, it’ll pose some difficult questions next year. You’re always saying just one more. Whatever happens, it will be a very difficult decision if I do walk away because I love playing for Dublin and it’s given me so many good friends.

“But there’s no point worrying about it. No one can make plans, the past few months have taught us that. What will be will be.”