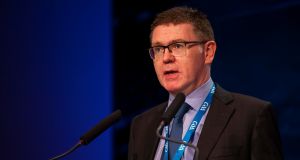 This development, which may prove controversial, emerged from the weekend’s Central Council meeting, held after congress.

The original proposal from Kildare club Raheens is unusual in that major playing-rules changes tend to originate with central committees and in many cases are trialled during the national league.

This rule will prohibit a defender who receives a kick-out from passing it back to his goalkeeper. It had, by the way, already provoked outbreaks of “loophole-ery” with suggestions that if a defender took the kick-out, he could receive a return pass.

It was unclear when the rule would be introduced, but director-general Tom Ryan provided clarification after the Central Council meeting.

“The standard position is, it comes in a month after congress and we are actually going to do that, with the exception of the National Football League finals.

“A club is entitled to come up with an idea, bring a motion, if people like it and it finds favour, let it go. The tricky little thing – and we all do it a bit – [is forget] that’s for every football match. It’s not just for inter-county matches.

“So we tossed it around for a few minutes downstairs at Central Council and pretty much everybody at the table had a perspective: ‘Our league has already started’ and ‘our league is starting in three weeks’ time and has an interregnum of two months and then gets going again.’

“The cleanest way to do it that we concluded was we’d just come in with it.”

It is another rule spooned onto the already full plates of referees, but Ryan played down fears on that score.

“It mightn’t be the most difficult one practically to implement, but I am not going to speak for referees.”

There was contrasting engagement from delegates on this proposal, which went through on Friday night with no contributions from the floor apart from the proposers, and the animated debate of Motion 13, to introduce the black card into hurling.

David Hassan, chair of the Standing Committee on the Playing Rules, put the case for the black card, pointing out the statistical evidence of cynical play in hurling.

None of the speakers who followed engaged with the substantive argument, preferring instead simply to sing the praises of hurling – eulogies that (inevitably) included the leftfield 2018 decision of Unesco to grant the game intangible cultural heritage status.

In the vote, the proposal was demolished by the delegates on a margin of 82 per cent to 18 per cent.

Asked was this absence of any serious debate a concern in respect of the decision, GAA president John Horan – who declared that the margin of the vote signified the end for the foreseeable future of efforts to control cynical play in hurling – was blunt.

“Personally, I wouldn’t be satisfied with the way it was pushed back by high-profile characters coming out and, whereas they’ve never fully denied that cynicism is there in hurling and we know that, see some of the tackles but yeah, they railed against it. Unfortunately we can only chair the meeting. I would concur with those concerns.”

There were also a high number of referrals-back of motions, including this year’s controversial switch of the under-20 football championship to February and March from its original dates in the summer.

Such was the antipathy of the floor to this that Horan accepted that it would have to revert.

Two conditional decisions with significant potential were taken. The first, Motion 19, gives the Central Competitions Control Committee the latitude to fix what has been until now “the Croke Park round” of any All-Ireland quarter-final round robins involving Dublin for a “neutral” venue.

This doesn’t rule out Croke Park but gives flexibility.

Motion 59 expands the current five-county Leinster championship to six from 2021 – assuming the current round-robin provincial formats are retained after the last of their three-year trial period concludes this summer.

Again, there was no debate on the matter, with all speakers supporting the proposal to have no relegation from Leinster this summer with the promotion of the Tier 2 McDonagh Cup winners.

Among the other news from Congress was the announcement of the Tailteann Cup as the name for the new Tier 2 championship. This was made by Horan in his annual address on Saturday and he used the opportunity to defend the concept of the championship, which counties in Division Two and Three are currently doing their damnedest to stay out of.

The president also said that details of the Bloody Sunday centenary commemorations would soon be announced.