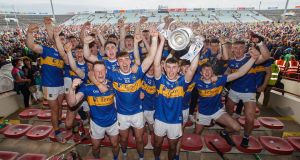 Tipperary are the kings of the hurling landscape following a second successive weekend where they blitzed their opponents with goals in an All-Ireland final.

Tipperary’s Craig Morgan said it was a dream come true to lead the under-20s to glory with a resounding 11-point win over Cork at the LIT Gaelic Grounds.

Jake Morris, Jerome Cahill and Paddy Cadell had already claimed senior All-Ireland medals in Croke Park and they showed their experience in front of a crowd of 18,652.

But it was Billy Seymour’s goal after just 19 seconds and the subsequent strikes from Andrew Ormond, Seymour again and Cahill that put this game to bed by the eighth minute.

The 20-year-old Kilruane MacDonaghs clubman was a delighted spectator from the Tipperary full-back line as their attack blitzed the Leesiders.

“It gives us a great lift watching it from the other end of the pitch,” said Morgan.

“Four goals going in in the first 10 minutes. It gave us a great lift to back and win the ball again and send it up for another goal.

“We said we wanted to start the match and take it after that. We were going to take our man on early and see what happens and go for the jugular.

“We went for them and it worked out.”

This was the first All-Ireland Under-20 championship but Tipperary had claimed the most recent under-21 title when they beat Cork 3-13 to 1-16 in last year’s decider, also in Limerick.

The two Munster counties had struck up a massive rivalry. This was their fourth meeting in two years between under-21 and under-20 and Cork had been victorious in the 2018 Munster final.

But crucially they were on the wrong side of the result in the provincial final this time and Liam Cahill’s side had plenty of confidence coming into this game on the back of a huge 8-16 to 1-15 victory over Wexford.

Denis Ring’s men had to be rock solid but they trailed 4-1 to 0-4 early on and there was no way back, even though Tommy O’Connell did find the net in the 46th minute.

“Cork were never going to be written off no matter how much we were ahead,” said Morgan.

“We knew we had to stay on top of them otherwise we could have easily lost. They came back at us again in the second half and fair play to the boys we dealt with them.

“We are ecstatic after that. We had a great performance as well which makes it even better. We played as good as we can.

“We weren’t really happy beforehand that we hadn’t played to our full potential. But against Cork we really brought it.

“To represent your club as well and captain Tipperary, it is a dream come true.”

“It is very hard to get back from that. We were conscious of it. We knew they were a serious goal threat. They have been all year,” said Ring.

“They have a serious set of forwards not alone on the pitch but off it. There are good forwards who didn’t even make the squad. They are exceptionally good in that perspective.

“Three of them had Celtic crosses from last week. That probably gave them a lot of confidence as well.

“They go at teams and they ask a lot of questions. If you are not ready as a defence you will suffer and that happened.”