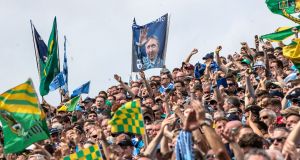 The GAA has reduced ticket prices for the All-Ireland final replay on Saturday week by a third, with stand tickets costing €60 and terrace tickets €30 for the second meeting of Dublin and Kerry.

Discounted children’s tickets, costing €10, will also be made available to the competing counties.

The ticket allocation and distribution will go through county boards and it is unlikely that tickets will go on general sale.

The allocations are in the region of 13,000 per competing county, regardless of county size or population.

All-Ireland finals are regarded as national occasions, so tickets are divided among all counties, not just those competing. But a supplementary distribution takes place and varies according to the returns sent back from non-competing counties.

The 3,000 or so tickets allocated to the teams competing in the minor final will be added to the pot for the replay and also likely end up in Dublin or Kerry hands.

To read more about the distribution of All-Ireland final tickets click here.

The GAA also announced the officials for the game on September 14th, with Cork’s Conor Lane taking charge of a third All-Ireland final.

Lane, a member of the Banteer/Lyre club, was also in charge of the 2016 final between Dublin and Mayo and the 2018 final meeting of Dublin and Tyrone.

His umpires on the day will be Kevin Roache, DJ O’Sullivan (both Banteer/Lyre), Ray Hegarty (Bride Rovers) and Pat Kelly (Kilshannig)

Laois’s Maurice Deegan will be the standby referee. The other linesman is David Coldrick (Meath) and the sideline official will be Niall Cullen (Fermanagh).

Meanwhile RTÉ have confirmed that a peak audience of 1,099,900 were watching Sunday’s final live on RTÉ2. An average of 968,700 viewers tuned-in for the game, a share of 76.5 per cent of those watching TV at the time. Additionally there were a total of 161,000 streams on RTÉ Player.