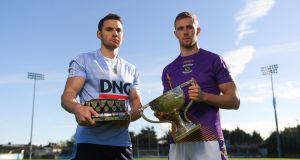 The GAA’s football rule changes may only be a proposition but Dublin’s four-time All-Ireland winner is clearly not a fan.

“We won’t know until a few of them are trialled, but my initial thoughts were just that they were pretty bad ideas. I don’t know how much kind of thought went into them, or was there any kind of consultation process, but I just don’t see what they are trying to achieve or what it’s going to do. It is going to change the game in so many ways – if they were all introduced.

“Now I know it’s unlikely they’d all be implemented, but it would just be a completely different game if all those were brought in. So yeah, I’d be completely against them to be honest.”

Speaking ahead of the Dublin football final on Sunday week, his club Kilmacud Crokes facing St Jude’s of Templeogue, Mannion is equally clear on the sin bin – even if Dublin manager Jim Gavin has been proposing a sin bin for years.

“That’s what I was thinking, when they were originally bringing in the black card. It seemed to me to be the more obvious one. It’s probably something that has to be trialled to see how it works out.

“You could have situations now where if a sin bin is brought in, teams will completely shut up shop for 10 minutes and do everything they can to just waste time and it’ll turn out to be worse again. It’s really difficult to see how these will work out unless they’re trialled.

“Even when they were bringing the kick-out mark in, when that was proposed I was kind of 50-50, I didn’t know what would work, what it would look like and then when it was trialled, I was like, ‘This actually works pretty well’.

“I thought that was a good one. That’s probably the only one that I’d be like, maybe it might work. So I suppose seeing if it’s trialled and how it works out, it could turn out to be a good idea.

“Then there’s the whole discussion again, should there be a pre-season? Do we need the O’Byrne Cup? Then do we trial them [rule changes] in that when people are saying you should get rid of them? They’re not wrong to try and improve the game. That’s what everyone wants.”