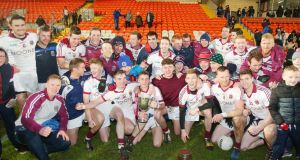 The absence of the Slaughtneil players has had a marked impact on the Derry senior side. Photograph: Jonathan Porter/Inpho

For the next couple of weekends there will be renewed focus on Slaughtneil, the Derry club which for two remarkable seasons has made a clean sweep of county and provincial titles in football, hurling and in the case of the camogie team last year’s All-Ireland and they are back in this year’s final.

This weekend the hurlers face Na Piarsaigh and a fortnight later, the footballers – featuring most of the same players – will take on the leading club in All-Ireland club football history, Cork’s Nemo Rangers.

Having lost two football finals in the past three years Slaughtneil have all the experience and have every chance of going one better this time. On the surface it looks a prosperous time for the games in Derry but at county level, both the footballers and hurlers are rooted to the bottom of their league tables in Divisions Three and 2B, respectively.

The most obvious explanation in the case of the hurlers is that the loss of Slaughtneil players is having an impact, as it frequently does on the counties of the Ulster club champions.

For the Derry footballers to be so affected is a sign of the times for the county, who 10 years ago beat Kerry in the final to win the Division One title. Although they have largely oscillated between Divisions One and Two in the meantime, until this season the county hadn’t been in the lower half of the league for 13 years.

Relegation last April on scoring difference was bad enough but the current season has started with two defeats, the first at home by Westmeath and the second last week, in Longford. This weekend’s fixture against fellow strugglers Offaly is already freighted with more urgency than would have been anticipated when the fixtures were released.

Manager Damian McErlain has acknowledged as much, accepting that a win is imperative going into what is the first break in the league, emphasising the competitiveness of the division and pointing out that the team is in transition but trusting that home advantage will help them turn a corner.

As manager of the Derry minors who reached last year’s All-Ireland final, McErlain was bullish when taking over, saying at the time of his appointment:

“We are massively looking forward to working with the county’s best players and the other stakeholders involved in creating the environment to fulfil the potential that’s within Derry football. We know the talent that exists within the county and we’ve developed three strong minor teams to further bolster that. We now need to ensure that we have the right environment for the players to develop further.

This year’s panel, announced in December, was notable for the omission of a couple of experienced players, Danny Heavron and Emmett McGuckin.

It was a brave move for the manager to jump up to senior level from minor. For a start, it’s difficult to bring players with you because they’re generally too young and the chance to work with them through the new, under-20 grade is lost.

The county has always performed miracles of husbandry given that its football area is so small. Derry city has no players involved nor even a senior club and what can be quarried from the traditional power bases to the south of the county has to suffice.

In the past when club teams did as well as Slaughtneil in the All-Ireland series there was a greater depth to the county championship and more intense levels of competition.

When Bellaghy reached the All-Ireland final in 1995, for instance, it was no bar to Derry winning the league – although in the days before the calendar-year season, there wasn’t the same pressure of fixtures.

Now though, the absence of the county champions’ players has had a marked impact on the county. When Slaughtneil reached a first All-Ireland in 2015, Derry were relegated from Division One and then last year’s run back to the final coincided with a further demotion.

So far this campaign, it’s zero from two and should the club reach another St Patrick’s Day final, McErlain will hardly see the Slaughtneil players in county colours even though they returned as quickly as possible last year.

Chrissy and Karl McKaigue, Brendan Rogers and Shane McGuigan are all key players for the county and played in last summer’s qualifier in Castlebar when Derry took eventual All-Ireland finalists Mayo to extra time and had the chance to beat them. Since then, McErlain has also called up Paul McNeill.

Expectations may have been unreasonable at the start of the season but there were plenty of takers for Derry to bounce back immediately into Division Two. Now, if they’re not careful and with a clutch of their best players otherwise engaged they’ll need to be careful not to be involved in matters at the other end of the table.