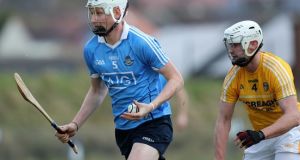 Dublin’s hurlers got off the mark in the Allianz Hurling League at Corrigan Park, Belfast - but only just, edging a one-point win over Antrim with a Donal Burke free deep in stoppage time.

The home side came from six points down at the break to restore parity in the third minute of injury time through a 90-metre free from talisman Neil McManus but Burke held his nerve to seal the points.

The Saffrons started better and were 0-4 to 0-1 to the good after 10 minutes, all the Antrim scores coming from the stick of McManus who finished the game with a 0-16 tally.

Dublin then found their rhythm and had restored parity by the 18th minute with Burke, Fergal Whitley, Paul Ryan, and James Madden all adding points to tie the scores at 0-6 apiece. McManus edged Antrim ahead on 26 minutes but the last seven points of the half all came from the boys in blue.

Conal Keaney showed why Gilroy brought him back into the panel with a brace from play and another returnee Danny Sutcliffe opened his account just before half time to leave the score 0-14 to 0-8 at the break.

Ryan tapped over a free to extend the Dublin lead to seven points early in the second half, but four points without reply had Antrim back within touching distance by the 40-minute mark. However the seven-point gap was restored when Ryan, Burke, Cian McBride and Whitely all raised white flags.

But if Dublin expected Antrim to wilt, they were mistaken. Graffin stormed forward for another point, and sub James McNaughton fired over a superb effort on 60 minutes to cut the gap to four. With McManus’s accuracy from placed balls and a point from Dan McCloskey, Antrim rattled off five points without reply to draw level at 0-22 apiece on 73 minutes.

But Antrim hearts were broken when Burke slotted over a late, late winner to seal Pat Gilroy’s first points as Dublin manager.