Mayo are traditional slow starters, and will be without talisman Lee Keegan 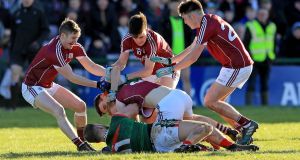 Down the track it comes. There’s nothing like a big first-round match which everyone’s been anticipating since the draw was made.

The pattern of this rivalry in recent times has been that Galway start the season well, but Mayo finish it better. So far that looks like remaining the case.

Galway have thrived in their first season back in Division One, compiling a litany of achievement from an unbeaten regulation season, the meanest defence in the league and a creditably feisty display against Dublin in the final.

Against that. Mayo were at sixes and sevens, short players and taken to the very edge of relegation on the last day of the season against Donegal. This is the third match between the rivals, and Galway have already won both the FBD and AFL fixtures.

Stephen Rochford’s team are said to be irritated by the aggressive pretensions of Galway in a sour encounter in Salthill last February, but crankiness is a limited weapon of choice in championship. Last season Mayo lost Keith Higgins to a red card after half an hour and it is impossible to believe that the one-point margin mightn’t have been overturned by his team keeping a full complement.

The problem with dwelling on that as an argument against Galway is that Kevin Walsh’s team have surged since last year, and have Damien Comer in resplendent form, skittling defences like a bumper car with its own energy supply.

Galway’s defensive system has another year of practice behind it, and much credit has been given to Paddy Tally’s physical preparation. They have also added some promising young talent, such as Seán Andy Ó Ceallaigh last year’s under-21 full back, a problem position for them, and Ciarán Duggan at centre field.

Mayo have gone in the other direction. Their talisman Lee Keegan is out injured, and despite half-hearted sightings of Lazarus Rochford is adamant that the Westport player will not be back for this. Cillian O’Connor has been named to start despite rumours that after recovery from a hamstring injury he would bench for the match.

There is a plausible theory that if O’Connor has 60 minutes in him he is more likely to impact in the first hour.

It hasn’t been one-way traffic. Eamonn Brannigan, whose pace is important to the Galway attack, is out, although combative corner back Eoghan Kerin gets the nod despite some local pessimism when he limped out of a club match.

There are two competing theories. One is that Mayo are too patched up to hit the ground running, an opening gambit that has anyway been beyond them in the past two years.

The other is that Galway have never come close to the sort of performances that Mayo routinely give at the sharp end of the championship, and are vulnerable to a focused challenge.

There’s truth in both, but Galway currently have the edge.