GAA set for formal review of All-Ireland and provincial championships

Currently, inter-county championships in both football and hurling are being played under an experimental format 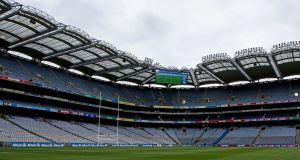 A GAA strategic plan steering group will conduct a formal review of the All-Ireland and provincial championships. Photo: Laszlo Geczo/Inpho

The GAA is to initiate a formal review of the All-Ireland and provincial championships. The intention is laid out in the association’s latest Strategic Plan, 2018-21, which was released on Friday. The document is the latest in a series that started in 2009 and work on it began last summer.

At the moment, inter-county championships in both football and hurling are being played under an experimental format, which is to be trialled for three years. So far the round-robin structure in the provincial hurling championship has proved popular with spectators and players.

In July the All-Ireland football quarter-finals will also be conducted on round-robin basis.

Whereas officials in Croke Park are monitoring these experiments and will review their progress at the end of the summer, the Strategic Plan appears to envisage a more root-and-branch analysis, proposing as a ‘specific action’: “Review the senior inter-county championship formats and propose recommendations accordingly.”

Furthermore, the two ‘progress indicators’ accompanying this are: “Production of a review with recommendations,” and “Decisions made to sustain or improve formats in both codes”.

Such a broad remit would bring contentious matters such as the provincial championships and graded championships in football into focus.

The Towards 2034 Committee, which was appointed to consider the challenges emerging for the GAA in what will be its 150th anniversary, reported earlier this year but its findings weren’t published, with the imminence of the Strategic Plan update cited as one of the reasons.

In all there are five goals outlined in Friday’s publication:

1) To improve opportunities for participating in Gaelic games

2) To develop our volunteers and administrators

3) To govern and administer our affairs more efficiently

4) To communicate GAA messages better to our members and followers

5) To protect and grow our Association.

Objectives, specific actions and progress indicators to achieve these goals are set out in the body of this Strategic Plan.

The proposal on senior, inter-county championships is part of 1) above.

Amongst other areas targeted for action is the ESRI study on the demands facing inter-county players. To address this the plan proposes: “Implementation of measures to assist inter-county players to achieve more balance between their playing, personal and professional lives.”

Towards 2034 proposed an allowance be paid to inter-county players and managers.

The Strategic Plan addresses the issue of amateurism by calling for it to be defined “in the context of the modern era” as well as the identification of practices, which are “acceptable/not acceptable in line with amateur status”.

The Plan will be overseen by an Implementation Committee, chaired by President, John Horan and reporting regularly to the GAA’s Management Committee.