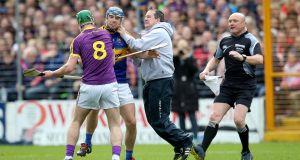 Former All-Ireland-winning player and manager Babs Keating has criticised the suspension of Tipperary’s Jason Forde and called for the match referee, Cork’s Diarmuid Kirwan, to be reprimanded.

Forde was issued with a two-match suspension for an incident with Wexford manager Davy Fitzgerald in the league semi-final in April but opted for a hearing. Before the Central Hearings Committee, the charge against him was amended from ‘assaulting an opposing team official’ to ‘contributing to a melee’.

This is a power under 7.3 (dd) of the GAA’s official guide, which allows the CHC to find a charge ‘not proven’ and to substitute a similar or less serious infraction for the one alleged by the CCCC.

In this case the CHC on Wednesday effectively created an equity jurisdiction for itself and was able to hand Forde a reduced suspension, as the minimum punishment for the revised infraction is one, as opposed to two matches.

Tipperary hadn’t decided by Thursday evening whether to appeal the ban, which would keep Forde out of the first Munster championship fixture of the season, against Cork in Thurles on June 21st.

Keating, who was attending the launch of the GAA Museum’s Imreoir to Bainisteoir exhibition in which he features, said the original proposed ban had been wrong and that the referee, whose failure to spot a foul by Tipperary in the lead-up to their second goal, provoked Fitzgerald’s entry onto the pitch.

“Look, it’s wrong to think that you could be killed out there with a belt of a hurley – a serious belt – and [your assailant] get one match and see what Jason Forde got two matches for. I’d be strong on . . . the man that caused the problem; will he be put to the end of the line? I’ll be happy then.

Meanwhile Kerry have announced that Johnny Buckley has been nominated by his club, All-Ireland champions Dr Crokes, to captain the county in 2017.

Buckley made his debut for Kerry against Laois in the 2012 league and later that year made his first championship appearance – as a replacement for Séamus Scanlon – in the Munster semi-final defeat by Cork – the last time that the latter beat their rivals in the province.

He was wing forward on the team that won the 2014 All-Ireland final against Donegal.

Elsewhere, the next phase of Government grant payments to inter-county players was announced. This year will see the first tranche of the new funding agreement being paid to players over the next week. Grants will range from €519 to €1,066 based on performance in last year’s championship.

Finally New York have named a strong panel for Sunday’s first football championship match of the summer, against Sligo in Gaelic Park.