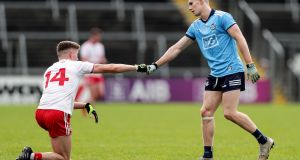 Saturday’s All-Ireland Under-20 football final between Dublin and Galway is the main casualty of the Government clarification that only “senior inter-county” games can take place once the country moves to Level 5 restrictions around Covid-19.

Those Level 5 restrictions are set to begin for six weeks from midnight tonight (Wednesday), which to further complicate things, means this evening’s three Leinster Under-20 hurling first round ties, which also include Dublin against Antrim, can still proceed: what exactly happens after that is still unclear.

However the GAA have already confirmed to both the Galway and Dublin county boards that the Under-20 final, set for Portlaoise at 4pm on Saturday, and set to be televised live on TG4, will not now go ahead. That’s one of 16 minor or Under-20 games that were originally set between Friday and next Thursday, all of which are now postponed.

A GAA statement, released on Wednesday read: “Following clarification from the Department of Sport around the staging of inter-county fixtures, the GAA can confirm that as of midnight this evening, all minor and U20 inter-county competitions are paused until further notice.

“Additionally, the GAA’s CCCC has been informed that Longford will not be fulfilling their Allianz Football League fixture with Cork this weekend.”

Under-20 football sponsors EirGrid were set to hold a Zoom media conference on Wednesday morning with the respective managers Tom Gray from Dublin and Donal Ó Fátharta from Galway, but that was postponed shortly before it was due to begin, around the same time Pat Kearney, the Galway GAA chairman, was on Galway Bay FM confirming that the county board had just received confirmation from Croke Park that the Under-20 football was not going ahead.

It was confirmed by the Dublin county board that their Under-20 Leinster Hurling Round 1 tie against Antrim would take place this evening as planned; throw-in is at 7pm in Darver.

According to Government’s Level 5 guidelines announced on Monday night, “professional, elite sports and inter-county Gaelic games, horse-racing and greyhound racing are permitted to continue behind closed doors;” however, this went against original the recommendation from the National Public Health Emergency Team (Nphet), which stated “senior” games only, the wording of which was included by Chief Medical Offier Dr Tony Holohan in a letter to Health Minister Stephen Donnelly last week.

Sport Ireland had also sought clarification on the matter, although the GAA have been careful to follow Nphet advice. A statement is expected from Croke Park later today to clarify whether or not the games in question can be re-fixed for later in the year, or early next year.

The Under-20 football final was originally meant to played last March, the semi-finals postponed to last weekend, where Dublin beat Tyrone and Galway beat Kerry:

“We’ll go training Tuesday and training Thursday, if the match is fixed we’ll play on Saturday, if it’s not, we won’t,” Gray, the Dublin manager, said after that Tyrone win, at that point not sure if any GAA activity would continue at Level 5. “From a personal point of view, having young fellas out in the open air, playing football, at this time of the year is very good for their physical and mental health. But look, that’s not my decision. We can’t control that.”

GAA’s head of games administration Feargal McGill last week made the point that Croke Park was expecting all GAA activity to cease at Level 5, before word of any exemption for the now senior activity only.

“Nobody ever contacted us informally or made a statement about it,” he said. “The only place we saw it was in the papers. Common sense would have told us that at Level 5 that it would be amazing if we were an exception in those circumstances.

“The GAA’s position on this has always been very clear since back in March. We follow public health guidance at all times and we continue to do that. When that gave the go-ahead for intercounty, we were happy to go along with it. If that changes, we follow the advice. You can’t half-follow it. The only exception to that was when we pulled club activity ourselves. Apart from that, you’re either fully following public health advice or you’re not.”

Paul Kerrigan calls it a day after 13 years with the Cork footballers 14:32
Diego Maradona buried as world mourns flawed soccer great 09:17
Neil Lennon insists he is the man to turn it around for Celtic 08:58
Billy Burns named at 10 to face Georgia; Errors cost Dundalk against Rapid Vienna 08:00
Andy Farrell looking forward to some selection headaches come the Six Nations 06:00