‘It is terrific to come back with two All-Ireland’s,’ says elated manager Paudie Murray 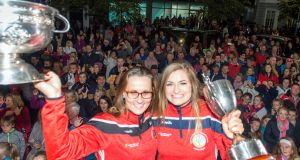 The Cork Senior and Intermediate camogie teams received a rapturous response in poor weather conditions on their arrival back on Leeside this evening when they brought back the O’Duffy and Jack McGrath cups.

Cork have secured the senior championship for a second consecutive year having emerged as one point winners over Kilkenny in Croke Park. The intermediate side triumphed over Down.

Earlier today the All-Ireland champions shared their success with patients at Our Lady’s Children’s Hospital in Crumlin.

Cork senior player Orla Cotter, who scored the winning point, said they were delighted to have triumphed in a tight final on Sunday.

“Kilkenny are a fantastic team, there has never been much between us . . . I can imagine they are heartbroken today.”

Cork manager Paudie Murray attributed his success to having been “brought up well” with six sisters in his family, including Cork senior camogie captain Aoife Murray.

Murray told Cork’s 96FM he was overjoyed with the reception, with several hundred people turning out to welcome the teams home.

“It is terrific to come back with two All-Ireland’s which doesn’t happen every day. It is brilliant. The reception is terrific.”

Prior to arriving in Cork at 8pm the players met fans in Mallow train station. The teams received an open top bus from Kent Station to South Mall in the city.

Cork’s victory saw Briege Corkery equal Rena Buckley in winning her 18th All-Ireland senior medal. Her medals have been secured in both camogie and Gaelic football.