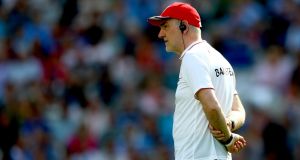 In an interview with the Sunday Independent, Cavanagh - who retired last year - said Harte was “an autocratic manager” who encouraged players to take part in prayers and attend Mass before championship games.

He also said players were each given rosary beads, and that prayers took place before team meals.

In a wide ranging interview the 35-year-old was asked about the suggestion Harte “imposes” his religious beliefs on the team.

“Noone on our team objected to it,” he said.

“Did everyone want to go to Mass before big games? No they didn’t, but it maybe suited us at times in that it brought us closer together.

“I’m a practising Catholic so it didn’t bother me but I can see how others might have an issue with it.

“I think religion is a private thing. I would never push it on anyone.”

Cavanagh said most players were happy to go along with it, “because it was Mickey, and something he believed in, and Tyrone have always been an incredibly bonded team”.

Speaking as his new autobiography The Obsession, is released, he also addressed violence among GAA players.

He described being “inconsolable” after another player allegedly spat in his face, and bit and nipped him “repeatedly and violently”.

“It’s accepted because it’s been happening for so long,” he said of violence on the pitch.

“That’s the reality. And it’s something I’ve witnessed form an early age. That’s why at times, I preferred basketball.”

The former footballer, who runs an accountancy firm, addressed questions about politics and having an Irish identity.

“I would probably call myself Irish,” he said.

“I’m a director of the company here and when you go on to the companies (register) it asks for your nationality and I answered it ‘Irish’.”

He added: “The political thing is frustrating at times...I think most people in Northern Ireland are progressive and open-minded and don’t see it as an issue, but others unfortunately do.”

In an interview with The Irish News Cavanagh also spoke about his mental health and struggling with his emotions.

“When you put anything into the public domain, you’re open to criticism and open to people seeing another side to you, which I hope people will enjoy. It’s very open about some of my emotions, my feelings and how I struggled,” he said.

“I wish whenever I was 17 or 18 I’d had something there to guide me through some tough days – before matches, after matches.

“In a world now where mental health is a huge issue, it really hit home to me how I wish somebody had been able to come to me and say to me ‘this is perfectly normal, there’s nothing here to worry about’.

“The more I spoke about some of my feelings before and after games, and in between games, after certain events in my life, I realised there was a pattern to the way I reacted to defeats – or reacted even sometimes to winning games. That I maybe was never happy.”