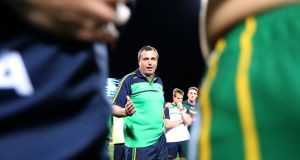 Paul Earley: was a key member of the Football Review Committee as well as managing Ireland’s International Rules team in 2013 and 2014. Photograph: Cathal Noonan/Inpho

As the debate about the future of football picks up momentum, Paul Earley has called for a more widespread consultation process to establish what the game’s stakeholders want and adds that he favours the 45-metre kick-out and tweaks to the black card.

Earley’s credentials are extensive. The former Roscommon player, who was the first Gaelic footballer to try his hand at Australian rules, is one of the GAA’s most highly-qualified coaches and was a key member of the Football Review Committee as well as managing Ireland’s International Rules team in 2013 and ’14.

He was speaking to The Irish times, having completed the weekend’s Pink Ribbon Tour to aid breast cancer research and accepted that the football season just passed hadn’t been vintage.

“It was disappointing but for a handful of matches. For instance of the Super 8s (All-Ireland quarter-finals), only five of the 12 ended in a margin of three points or less and the other seven were very one-sided. There were a few exciting matches but they were the exception rather than the rule.”

He echoes calls by a number of people, including former Dublin player-manager Tony Hanahoe, for a central committee to review the game and to decide what direction it should take.

At present Croke Park has asked counties to submit proposals for rule changes but Earley isn’t convinced this is a sufficiently thorough canvass.

“If the county boards have conducted research to find out what the broad view of a county is, that would be fine but if it’s just an administration view I think it needs to be broader.

“The Football Review Committee started with that and decided to look to the public to get a steer and through the website we got 3,000 submissions from the public and players. The consensus was that they wanted to see high catching, long-range kicking and score-taking; they were the key ones.”

One of the FRC recommendations was the mark, which has been part of the game in the past two seasons and the consensus would be that it has been an addition to the game, encouraging high catching between the 45s.

“No doubt,” says Earley. “We proposed it but it didn’t get passed because it got 60 per cent [as opposed to two-thirds – a restriction since relaxed] but subsequently it was accepted.

“You could expand that and have all kick-outs over the 45, which creates more contests and should result in more catches.

“If it’s a core skill people want to see more and it is a major tradition then we need to encourage it and I would be in favour of requiring the kick-out to go beyond the 45. Opponents say, ‘ah, that won’t work at club level’. If that’s the problem, simply change the rule on kick-outs and like in the women’s game, use the 20-metre line for kicking out.”

That requirement for all kick-outs to pass the 45 is now used in the international game, an initiative that arose when Earley was Ireland manager.

“It came about by accident. After my first year involved when the AFL sent over the indigenous team and we beat them comprehensively the Aussies wanted to make rule changes and they wanted to get their big ruck men involved in the game.

“I spoke to Pat Daly [GAA director of games], who said that they wanted a throw-up in the middle after every score and I said that would be madness because there are so many scores there’d be stoppages all the time and proposed instead to facilitate the big men in their game by making every kick-out go over the 45, which in theory was an advantage to them.

“They accepted that and it was good because we were forced to plan for it the following year and did a lot of work. As it has turned out, Ireland have been more dominant under the kick-out in general, which highlights the fact that we have some great fielders in the game.

“Hurling has had a great year. One of the reasons I believe is that there is a contest for the ball every 20 seconds and people love to watch the contest. None of us want to see the ball being moved side-to-side, over-and-back and over-and-back, let’s be honest. The contest is what the games have been built on. I believe we need to encourage that in Gaelic football and the kick-out over 45 metres would do that.

“It would also encourage high fielding and cut out the laboured build-up with so much hand passing because the possession game comes from the short kick-out, players retreating and then teams holding the ball through the middle. You’re also just one kick away from the scoring zone when you make the catch so it becomes a more exciting prospect.”

He feels that the black card has been effective in a number of respects but that it needs refinement.

“There are still some contentious issues around the black card, such as deliberate fouling at the end of games when it loses its bite as a punishment. Maybe some of the other FRC proposals such as bringing frees forward could be considered in those circumstances.

Paul Earley took part in the Pink Ribbon tour at the weekend to raise funds for breast cancer research. Donations are still being taken at pink-ribbon-tour.everydayhero.do.