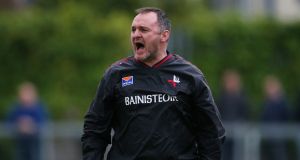 Roscommon county board were unable to ratify a new football manager on Monday night. According to a statement, it had been “hoped to put the name of the new senior football team manager before a county board meeting tonight. Unfortunately, our preferred candidate has requested additional time to confirm one additional member of his backroom team.”

The ‘preferred candidate’ is Aidan O’Rourke and the former Armagh All-Ireland winner was expected to be ratified at the meeting of the county committee in the Abbey Hotel.

In the event, his name was unable to go forward as the availability of one of his backroom team had hit a late snag. Sources said that the person in question was not Mike McGurn, the internationally experienced strength and conditioning coach, who had been part of O’Rourke’s team but there were no further details released.

The development comes as a setback to the county, which has the only remaining football management vacancy in the country – although the vacancy came late in the day with Kevin McStay’s unexpected departure from the position in September.

O’Rourke has extensive experience at county level, having managed Louth between 2012 and ‘14 and worked as a selector and coach with James McCartan in Down and Kieran McGeeney in both Kildare and Armagh. He is currently the GAA Performance Manager with Queen’s University, Belfast and also writes a coaching column for the RTÉ website.

Mike McGurn has worked across a range of sports, including with the Ireland rugby team, Premiership soccer clubs and boxer Bernard Dunne. His GAA experience has been with Fermanagh and Armagh as well as being involved with the Ireland international rules team with Sean Boylan in 2008.

The appointment of O’Rourke and McGurn was seen as positive by many as it appeared to address two of the most obvious weaknesses in the team, which reached the last eight in the All-Ireland championship and gained promotion to Division One of the league: defensive play and strength and conditioning.

It is hoped that the appointment can go ahead later in the week with another board meeting pencilled in for Wednesday.

Elsewhere Kerry’s Competitions Control Committee will be busy this week, as they decide what action to take after violent scenes erupted in the county football semi-final replay in which Dingle beat East Kerry 4-13 to 0-12.

On Monday they were still awaiting the referee’s report and if that is in any way unclear, they may have to launch an investigation, which will need to conclude before next weekend’s final if Dingle are to face any suspensions for the final against Dr Crokes.

The match footage most widely circulated on social media shows a Dingle team official, running on to the pitch and punching East Kerry’s Dara Moynihan, who is knocked down by the assault.

In response to the melee referee Paul Hayes sent off one player and a member of each team’s management.

The dismissed player was Paudie Clifford, a brother of county star David, who was also sent off later in the match following an altercation with Dingle’s Mikey Boyle.

The minimum punishment facing a team official for “any type of physical interference with an opposing player or team official” under 7.2 (c) is eight weeks (which Wexford hurling manager Davy Fitzgerald received in 2017 for getting involved with Tipperary’s Jason Forde).

For the GAA however, violent indiscipline at club matches has become such an issue this season that it’s hard to imagine that a minimum suspension could be seen as appropriate and so the outcome will be awaited with interest in Croke Park.

Finally, the great Wexford hurler Tom Neville was laid to rest on Monday at the age of 78. A member of the county’s All-Ireland winning sides of 1960 and ‘68, he was an All Star corner back (twice on the right and once on the left) for three successive years, 1963-65.

From Fethard-on-Sea, he lived his later life in Carlow and was a well-respected coach after retiring from the playing field. He managed Kilkenny club St Martin’s to the 1985 All-Ireland title.

“I would have Tom Neville and Bobby Rackard in the same league. Tom was a fantastic corner back and back at a time when they were typically robust and tough defenders, he was a great hurler. I have great memories of him because my first All-Ireland final was in 1960.

“He gave back a lot to the game as well, coaching the Martins and also with Oulart when they had their breakthrough. He was a great hurling man.”