A ‘special win’ for Dublin in front of a record crowd 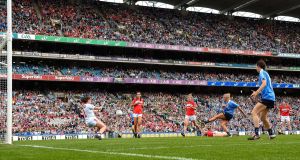 For the most part the Dublin camp had been insistent all through the build-up to the All-Ireland final that it was neither here nor there that Cork happened to be their opponents. But you half sensed they might have been saying it with their fingers crossed behind their backs.

Cork, after all, had been their nemesis on the four occasions they had met in an All-Ireland final, in 2009, 2014, 2015 and 2016. And it wasn’t just that they had lost to them every time, the margins of defeat were excruciating – three by a single point and the other by just two.

Beating Mayo last year to win just their second senior title would have eased the pain, but there was a sense it would never quite be erased until they had finally got the better of Cork on the big day.

A beaming Dublin manager Mick Bohan conceded that, yes, beating Cork made the day all the more special.

“We couldn’t make it out to be more than a game coming into it, it would have become an immovable beast if we had, but I think everyone knew it was,” he said.

“We’re incredibly proud, we’ve been building for this for 18 months. They were the standard bearers, and we felt that for us to get the crown we would have to take them out. And I say that with the utmost respect, they brought the game to a whole new level, it’s been our goal all along to set a standard higher than them.”

Dublin never once trailed in the game, but Cork pushed them harder than any team has done this Championship season, twice narrowing their lead to two points in the second half.

It was Carla Rowe who all but sealed the victory 11 minutes from time with her second goal of the game, Lyndsey Davey picking her out before she brilliantly slotted the ball past Martina O’Brien to give Dublin some breathing space.

Cork manager Ephie Fitzgerald saluted the victors after the game. “I’ve the utmost respect for the Dublin girls, they’re a really nice bunch and they put so much in to it, like our girls do.

“They took their defeats to us very graciously, and that’s what we have to do now as well. It’s very easy to be magnanimous in victory, but when you lose you have to acknowledge that the better team won.”

Sinead Goldrick summed up what it all meant to the Dublin team, not least finally coming out on top in a Championship battle with Cork.

“I didn’t realise how important it was until the final whistle. You try to put all that to the back of your head, but when the whistle went it really hit home that we had beaten Cork, because they hurt us a lot of times. But more than anything, I just feel pride in this group of players.

“Away from the lights we went on a journey together. Mick said in 10 years’ time you might see each other in a pub or on the street, and you just have to give each other that look because no one else outside of the team knows what we’ve been through, and how much we have pushed each other.

“Football is about seeing people at their best, but behind the scenes there are things happening to players in their lives, and we all help each other get through those times.

“This group is so, so special, and to keep Brendan [the Brendan Martin Cup] in Dublin, we’ve a huge sense of pride in that. And it was a good display of football too, and that’s important to us – you don’t just want to win, you want to win in a way that has those 50,000 people having respect for the game.