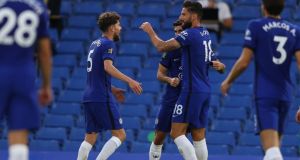 Chelsea continue to lead the race for the Premier League’s top four after their 1-0 win over Norwich last night, an anxious slog against opponents already relegated. Olivier Giroud’s goal was enough to keep them in third place, four points clear of Leicester and Manchester United after playing a game more than their closest rivals. Manchester City’s two-year ban from European competition, imposed by Uefa after it found the club guilty of a serious breach of financial fair play rules, has been lifted by the court of arbitration for sport. The court said City had failed to cooperate with Uefa’s investigations but found that “most of the alleged breaches were either not established or time-barred”. José Mourinho and Jürgen Klopp have strongly criticised the ruling. Tonight there are four Premier League matches including Arsenal versus champions Liverpool at 8.15pm.

The GAA confirmed on Tuesday that most of its indoor facilities will remain closed until further notice on “a risk stratification basis”, as now agreed by the Association’s Covid Advisory Group. Therefore all dressing rooms, club and county gyms will remain closed even as club matches resume this weekend. This weekend will see the first of the live club broadcasts on TG4, which will continue over the coming months with one live game on the Friday night and one live on Sunday afternoon. Wexford and Dublin senior hurling championship are the pick of the first post-lockdown fixtures of 2020. In his column this morning, Sean Moran explains how the Jack Charlton era made the GAA sit up and realise its greatest strength: “The Charlton years paradoxically brought out the GAA’s great strength – its games as modern sports competing with other games without losing their cultural distinctiveness and not some theme park, ring-fenced by anathema.”

1 Why are there so many angry dads?
2 Coronavirus: Warning against blame game as 46 more cases are confirmed
3 Two people die after car plunges off road and overturns in river
4 David Trimble: After the big dinner in Oslo, somebody said why don’t we party together?
5 John Hume, architect of peace process, dies aged 83
6 ‘I’m pretty sure that if I had been somewhere else they would have just let me die’
7 Netflix: 10 of the best new shows and films to watch in August
8 Maureen Dowd: The US president and the damage done
9 Former Spanish king to go into exile over financial allegations
10 24 hours in Bundoran: ‘The town is mental. No one expected it to be so busy’
11 Portuguese police disperse groups of young Irish holidaymakers
12 Nuns hold marathon prayer relay for Covid-19 frontline
13 Owner of Dundrum Town Centre to sell prized assets
14 ASTI seeks agreement on pay as State plans to hire 1,000 teachers
15 John Hume obituary: Nationalist leader who championed ‘agreed Ireland’
16 DUP’s Brexit ads: Who bankrolled the secretive £435,000 campaign?
17 Is that concealer you’re wearing, Mr President? The rise of men’s makeup
18 Nine arrested following ‘shocking’ antisocial behaviour in Kilkee
19 John Hume: The mesmerising persuader the public rarely got to see
20 John Hume: A life in quotes
21 More than 40 test positive for Covid-19 on Norwegian cruise ship
22 Man (25) appears in court charged with murder in Co Kildare
23 Una Mullally: Dublin has chance to be reborn amid Covid-19
24 Phased reopening in German schools as classes judged unlikely Covid-19 hotspots
25 Not for the birds: Keep your blueberries for these delicious oat slices
26 Optimism fades for pubs under next lockdown lifting phase
27 James Ryan injury could open the door for Ryan Baird
28 A Northern Catholic writes . . . John Hume in 1964
29 On your bike: 12 reasons to get cycling
30 Five cases of Covid-19 confirmed at food processing factory in Co Offaly
31 Concern as OPW rejects responsibility for ancient church in Dublin
32 The Irish Times view on John Hume: He stayed the course of peace
33 Reopening of schools and colleges
34 John Hume funeral Mass to take place in Derry on Wednesday morning
35 Róisín Ingle: I’m menstruating as I write this. And I’m mad as all bloody hell
36 Pressure mounts on Poland and Hungary over eroded rule of law
37 How new hobbies help ease the stress of difficult times
38 Misconduct claims in Department of Transport spark Garda inquiry
39 Pilita Clark: Working from home is starting to pall
40 ‘Huge increase’ in falls among older people following lockdown
Real news has value SUBSCRIBE