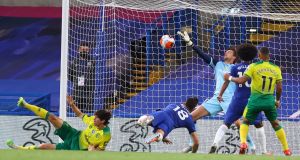 If the task was simply to show Frank Lampard that they are capable of making some noise on the pitch, then Chelsea’s players passed the test.

Yet telling a team-mate whether they have time on the ball seems a rather basic aim for a side chasing Champions League qualification. Pub sides are capable of making a lot of noise and although Chelsea found a way to bounce back from their Sheffield United debacle, the concern is how they fell short when it came to expressing themselves in possession against the worst team in the Premier League.

Be under no illusions: this was an anxious slog against opponents already condemned to return to the Championship. Lampard will not be fooled by this nervy victory, even though Olivier Giroud’s goal was enough to keep Chelsea in third place, four points clear of Leicester and Manchester United after playing a game more than their closest rivals.

Lampard is too realistic not to know that sterner examinations lie in wait. Chelsea’s final two games are against Liverpool and Wolves, while they have an FA Cup semi-final against Manchester United to think about on Sunday. Being generous, perhaps they were keeping their powder dry. Even so there will have to be an improvement at Wembley if Lampard is to avoid a fourth defeat to Ole Gunnar Solskjær’s side this season.

While an empty stadium offered an opportunity to assess whether Lampard was right to home in on his team’s lack of noise after the aberration at Bramall Lane, the early stages offered a reminder that Chelsea have more than an attitude problem.

An inability to break down opponents intent on defending has been a weakness throughout the campaign and, as the opening period wore on with no sign of a breakthrough, it was clear to see why Chelsea have already signed Timo Werner and Hakim Ziyech to add incision to an inconsistent attack next season.

This was a huge opportunity for Chelsea after Manchester United’s late slip against Southampton on Monday and it was threatening to pass them by. If Lampard was hoping to see his players let out some of their anger by tearing into Norwich from the first whistle, he was left sorely disappointed.

While there was plenty of chatter from Chelsea – especially from Kepa Arrizabagala, who never stops talking – but little sign of any spark. Norwich, who were playing for nothing but pride, found it too easy to put men behind the ball and maintain a solid shape.

The passing was too slow from Chelsea at first. There were five changes from Lampard, who brought in some experience after speaking about the need to show character, but the frustration was mounting. Too many crosses were failing to hit the target, the one-twos on the edge of the area were failing to come off and the lethargy was summed up when Kurt Zouma picked out a cameraman with a raking crossfield pass.

Yet the prospect of a side as leaky as Norwich holding out seemed unlikely and Chelsea upped the tempo after a while, stretching the play and involving their wingers more. Zouma wasted a glorious chance from a corner, heading wide from close range, and Christian Pulisic forced Tim Krul to make a stunning save following a smart turn.

Pulisic, always lively with the ball at his feet, looked the likeliest to pick the lock and so it proved on the stroke of half-time, the American teasing Norwich on the left before crossing for Giroud to head in from six yards.

With the tension released, Chelsea ought to have been hungry for goals at the start of the second half. They pressed to win the ball off Norwich and almost doubled their lead when Willian pinched possession before seeing his shot deflected over. Unmarked, Giroud planted a header over from the resulting corner.

Yet it was still too pedestrian. Ruben Loftus-Cheek, handed a rare start in midfield as he continues to build his fitness after recovering from an Achilles injury, was struggling to make an impression supporting Giroud and Willian, out of contract at the end of the season, was having an erratic game on the right. Sensing that they were still in the contest, Norwich crept forward and started to have a go. Chelsea needed maximum focus in defence to avoid a calamity.

While Krul had to make late saves from Pulisic and Marcos Alonso, this was laboured from Chelsea. Even turning up the volume cannot hide the flaws. – Guardian

1 James Ryan injury could open the door for Ryan Baird
2 Ken Early: Frank Lampard’s problems start at number one
3 Lockdown hiatus may afford way back for Waterford hopefuls
4 All in the Game: Klopp gets the last laugh in quiz show
5 The Offload: Schools rugby talk in the Seanad appears tone deaf
Real news has value SUBSCRIBE