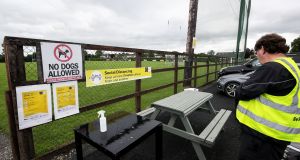 The 19-fold higher risk of infection is one of the principal reasons why most indoor GAA facilities will remain closed until further notice on “a risk stratification basis”, as now agreed by the Association’s Covid Advisory Group.

At a meeting of the group on Monday night, it was decided that most indoor facilities should remain closed after next Monday, July 20th, meaning all dressingrooms, club and county gyms will remain closed even as club matches resume this weekend.

“One of the key parts of our control measures around keeping clubs safe is trying to keep players outdoors as much as possible,” said Feargal McGill, GAA director of player, club, and games administration.

“The reason for that is you are 19 times more likely to contract the virus indoors than you are outdoors. Purely from a commonsense basis, it doesn’t make any sense for the GAA to open dressingrooms or gyms at this stage.

It was agreed that handball alleys could be opened from July 20th, which marks phase four of the Government’s revised roadmap on the relaxation of lockdown schedules, but can only be used subject to the guidance and control measures outlined in the GAA’s handball return to play document.

Club bars that do not serve food are permitted to open from July 20th, but only provided they follow the Government regulations for the relevant sector and all required third-party insurances and assurances are in place.

These latest instructions come after clubs emerged from the three-month lockdown with the resumption of adult training from June 24th, with challenge games allowed from June 29th, before a return of official club fixtures from this Friday.

While such activity has been making a welcome return in recent weeks, concerns do remain, the Atticall club in Co Down cancelling all training at its facilities after one of its members tested positive for coronavirus on Monday

“It means, and I don’t want to speak too soon, but our control measures appear to be working. We do realise it is an inconvenience to people that dressingrooms can’t open, but there is good common sense behind that. It is designed to ensure that clubs are able to complete their fixtures and that no club is placed into lockdown.”

The GAA also issued updated guidance to clubs about how to deal with suspected or positive Covid-19 cases: “It is quite simple,” said McGill, “if someone in a club gets the symptoms of Covid they should contact their GP.

“If their GP thinks they need to, then they will arrange testing. If it is a negative test the player can return to activity, if it is a positive test and the player has Covid, public health will then take over.

“Public health will do an assessment on the player’s movements in the previous days and will make a decision as to who should be considered a close contact or a casual contact in a GAA context.”

To date, as long as activity remains outdoors, contact is considered casual, not close: “It appears to us in the risk assessments that have taken place anyone who is outdoors hasn’t to date been considered a close contact,” added McGill. “Where activities are outdoors it appears players are being considered casual rather than close contacts in those circumstances by public health, not by us.”

This advice is subject to amendment pending the overall guidance document on Return to Sport Activities for Adults by the HPSC/HSE in the 26 counties and any guidelines that may be issued by the Department of Health and Social Care in the six counties.