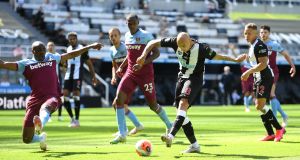 The Saudi dominated consortium who hope to shortly be handed the keys to St James’ Park after completing a £300m takeover at Newcastle United must decide whether to retain Bruce as manager but on this entertaining evidence the answer must surely be affirmative. Any coach capable of bringing the best out of Allan Saint-Maximin – once again, a vibrant presence – should not be discarded lightly.

Moyes’s future in charge of West Ham is shrouded in similar uncertainty but the draw leaves his side 16th, still vulnerable to relegation but four points clear of the bottom three. If only Andriy Yarmolenko had been fit enough to start victory might have been within the visitors’ grasp yet even without his catalytic inspiration they twice failed to protect leads.

Jamaal Lascelles was touch and go to make Steve Bruce’s teamsheet after sustaining a nasty ankle injury last week but passed a late fitness test. By the fourth minute Newcastle’s captain and key central defender probably wished he had failed it.

Lascelles somehow got his feet in an awful tangle when Jarrod Bowen crossed low from the right and, having neglected to make the necessary interception, watched in considerable mortification as Michail Antonio took a steadying touch before lashing the ball beyond Martin Dubravka’s reach. Hats off to Pablo Fornals for the intelligent, defence bisecting, pass to Bowen which initiated everything but Lascelles should have dealt with it.

Newcastle responded by dominating possession with Saint-Maximin’s dribbles an increasing source of technical area consternation for Moyes. One particular cameo involving the French winger dodging three markers seemed to spread a high degree of hesitancy and uncertainty among West Ham’s defence, forcing them ever deeper.

When Saint-Maximin switched from the left to the right the sense of visiting confusion heightened, setting the scene for Newcastle’s 17th minute equaliser. Appropriately it began with a clever burst of acceleration and pass from Saint-Maximin who succeeded in not only drawing Aaron Cresswell out of position but playing in the overlapping Emil Krafth. All that remained was for the Sweden right back to cross for the impressive Miguel Almirón to tap his eight goal of the season in from close range at the near post.

The refreshingly kaleidoscopic passing and movement preceding that leveller emphasised the dramatic improvement in Bruce’s side since his switch to a back four and more attacking mindset shortly before lockdown.

This form of tactical “de-confinement” has not only liberated Saint-Maximin to cause persistent chaos among opposition ranks and Krafth to overlap but highlighted Jonjo Shelvey’s strengths. Shelvey, on West Ham’s shopping list last summer, duly delighted in controlling much of the game from his deep lying central midfield station and unhinging West Ham’s rearguard courtesy of some incisive long passes.

Newcastle were sustaining a ferocious tempo but, rising to the challenge, West Ham rallied as half time approached and began playing with a similar intensity. Almost imperceptibly, Bruce’s players morphed from omnipotence to the verge of losing control and Dubravka reacted smartly to toe Bowen’s low shot to safety.

It did not help the home cause that, shortly before the break, Isaac Hayden limped off to be replaced by Nabil Bentaleb. Hayden had been excellent in central midfield, simultaneously protecting Shelvey and making a series of important challenges.

Tomas Soucek restored West Ham’s lead in the 65th minute with his second goal in as many games, It came from a corner, won and then superbly taken by Ryan Fredericks, which prefaced Declan Rice powering a fabulous header against the bar before Soucek nodded in the rebound.

Wavering visiting concentration levels very soon wiped the smile from Moyes’s face. A mere two minutes separated Soucek’s celebrations and Shelvey guiding a shot into the bottom corner. As West Ham’s backline played statues Shelvey collected a pass from Joelinton – so much more effective in a left-sided attacking role rather than out of position at centre forward - before exchanging passes with Dwight Gayle and, finally, sidefooting into the bottom corner past Lukasz Fabianski. Fornals proceeded to protest, vehemently, that the goal should be disallowed for offside – which was rather rich considering he had played Gayle onside.

Yarmolenko, simultaneously exerting a transformative effect on his West Ham team-mates and stretching Newcastle to the limit after stepping off the bench, forced Dubravaka into a decent save but a draw felt the right result. - Guardian