This argument was never about fair play in the first place, it always had money at its core 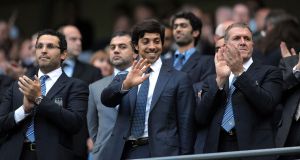 If you strike me down, I shall become more powerful than you can possibly imagine. If there was ever any doubt that Sheikh Mansour bin Zayed was playing this game to win, such thoughts will have been erased for good by the success of Manchester City’s stunning, potentially transformative appeal against the judicial processes of European football.

This being football, the success of City’s supremely powerful legal team in junking a flawed two-year ban will no doubt be cast in the most binary terms.

For the most partisan areas of the club’s support, and indeed for some of the surrounding media, the judicial panel’s decision will be seen as “a sensational victory” in the classic football style: cause for dancing in the streets, beer thrown in the air, taunting memes, perhaps even a kind of heartwarming underdog story.

At the other extreme there will be a temptation to see City’s victory as another strand in a wider global truth. Plate sin with gold and the strong lance of justice hurtless breaks. Or in other words, if you don’t like the justice you receive, please ask your sales adviser as there are other, more expensive versions available.

Financial fair play was put in place to control the richest players at European football’s table. But the richest players can also afford the best lawyers. Certainly, they can afford better lawyers than those at Uefa’s disposal, judging by an oddly brittle case reliant on time-barred complaints. A two-year ban seemed punitive at the time. No ban at all, despite having obstructed Uefa’s process, seems lenient, but is perhaps a reaction to the former.

As ever, the truth is more nuanced than either of those polarities. There are probably two things worth saying right now. First, this is not in any sense a victory for the little man. The little man was never involved in this battle in the first place. No doubt they will be dancing in the streets of global billionaire overclass this evening, but this would also have been the case had the decision gone in Uefa’s favour.

This argument has always been about the divvying up of wealth and privilege among the already wealthy and privileged. By way of example, one likely upshot of City losing this case would have been Manchester United taking their place in the Champions League next season. Which of these outcomes makes the most sporting sense? Which feels most like evidence of life-affirming social mobility? Which model of hyper-capitalism – state-backed, or leveraged buyout – do you prefer?

It is worth remembering this in any debate about fairness. There are no Ewoks here. Everyone is Darth Vader. And money – either the money you like, or the money you don’t like – is always winning this game.

This is not to say City’s victory will leave European football unchanged. The FFP rules were always a strange construct, born out of the sensible idea of restricting unsustainable debt, but also shot through with a grandiose pseudo-socialism cooked up during Michel Platini’s time at Uefa. Platini talked about wanting to “protect football from business”, and argued that cultural protectionism was justified, that the unfettered free market was not applicable to football.

In the years since the debt burden has been stabilised. But the rules have also protected this notion of ancestral privilege. In 11 seasons of FFP football the Champions League has still been dominated by the same top 10 wealthiest clubs from the year it first came in to play, clubs that have become ever more untouchable each year.

Barcelona, member-owned but with a historic dual-stranglehold on Spanish football, are deemed good. The arriviste overspending of a jobbing billionaire is bad. But how is anyone to break into this world? And what kind of appalling mismanagement would it take to actually fall out of it (ladies and gentlemen, may I introduce you to: Arsenal)?

All of which brings us on, finally, to football and to the immediate future of a City squad whose basic existence had been cast as a crime against sport, but which is now free to continue its pursuit of a more familiar kind of glory.

There was no public indication Pep Guardiola might have left had the ban been upheld. Those in the know seemed to suggest he was staying in any case. But Guardiola can now see out his contract with the added boost of two shots in 10 months at the competition he covets most.

The talk of late-20s star players agitating for a move is also dead in the water. This team have a free run from here, invigorated by a galvanising sense of righteousness, and with players fit and in form.

Signings will be required: a high-class centre-half, perhaps a better heir to Fernandinho, perhaps even another centre-forward. But who would bet against this sublime City team storming their way through Uefa’s mini club Euros in Portugal next month, or indeed against the narrative gold of a meeting in the final with a strong and settled Paris Saint-Germain?

As a season-ending Uefa showpiece it is hard to imagine a better reminder that this has always been about money versus money: new, old, or even newer. Or indeed that the greatest failure of FFP in the last few years isn’t City’s case, but the absurdity of PSG spending £1bn on transfers, successfully skewing their own domestic league in perpetuity, and still escaping any real restraint.

In the wake of such cases there is a view the greatest legacy of FFP will be to undermine Uefa’s own notions of centralised control, ushering ever closer some kind of private equity breakaway league. This is still some way off. But Uefa’s authority, not to mention its basic sense of competence, is seriously undermined. And let’s face it, fair play was never really a part of this argument in the first place. – Guardian

1 Sligo meeting abandoned after four races due to safety concerns
2 Nicola Sturgeon ‘furious’ as players’ pub trip sees Aberdeen game postponed
3 A new putter for Tiger Woods is something worth noting
4 The game they loved so well: How cricket united Hume, McGuinness and McCann
5 Elina Svitolina and Kiki Bertens pull out of US Open
Real news has value SUBSCRIBE
Crossword Get access to over 6,000 interactive crosswords