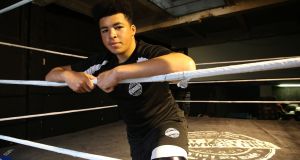 You’ve really got to see Dr of Thuganomics, John Cena, flip the Killswitch. It’s his trademark move, a side release Spin-out Powerbomb. Or former US marine Randy Orton, the Apex Predator. His Gutwrench Elevated Neckbreaker, it’s a beautifully choreographed piece of violence.

Both now franchises in their own right, it was Cena and Orton who opened the eyes of Justin Anene to the eyeliner end of sport, Wrestlemania and Smackdowns, a world of ham acting and clothes lining, a world the teenage Dubliner hopes to one day successfully body slam.

At 16-years-old Anene, in the land of muscle and make believe, talks like a top rope veteran. Already a professional he is paid to do shows around Ireland. It’s his career now outside of school but the future he sees for himself is much bigger than parish halls and community gyms.

Gripped when he first set eyes on the spangled pantomime from his sitting room, it was initially the World Wrestling Federation (WWF) that fed the habit. It was magic to a child, the flying bodies and hair pulling, the music and ring capers with full fan participation.

Later in a jolt of self realisation the WWF became World Wrestling Entertainment (WWE). The lines less blurred, it was a spectacle of sports entertainment, men and women in make-up and agreed scripts.

Thuganomics and Predator were the constant narratives that ran through Anene’s early years. What it was that drew him in he doesn’t yet fully understand. But he got it. He got what it was about. He got the razzmatazz attraction. He got the storylines. He got the tight trunks, the dull thuds and the histrionics.

All of it was enough to blow away a 13-year-old “chubby kid” who was “always insecure about my weight”, hit the gym and acquire a stage name. Anene was too exotic, not catchy. It didn’t take long for Justin Daniels to be born. From a television fantasy to flying across the canvas for money, Anene aka Daniels had his first competitive professional wrestling match at 14 against one of his best friends.

“It ended up going really, really, really well,” he says. “ I was the heel [villain]. I was the 14-year-old bad guy. I lost. Winning and losing is irrelevant in the wrestling world.”

“Most people grow out of watching wrestling. But I never grew out of it,” he says. “I just kept watching. My whole life. I watched it on TV all the time and I’d go to the live shows in the 3 Arena. Seeing it live with the lights and the loud music. I don’t know what it was. There was something about it that made me want to do it so bad.

“I had posters and T-shirts and figures and stuff. It was the American scene. There has been an Irish wrestling scene for years. But it’s only starting to get exposure now.”

Anene trains in The Fight Factory in Dublin’s North Wall, a professional wrestling training school. An independent, he is a gun for hire and wrestles with Fight Factory and Over the Top (OTT). If the promoters like the wrestler, believe the fans buy into the character and he is capable enough to credibly run with the narrative, they book him into shows.

Those shows fill Dublin’s 3Arena. They sell out the 2,200 seat National Stadium and the adjacent Ringside Club. But there are always higher rungs to climb.

There is NXT UK, the United Kingdom-based brand of the cash cow WWE, which is listed on the New York Stock Exchange and in 2019 generated revenue of $960.4 million.There is a big Japanese franchise, NJPW.

“They would have a big meeting with all the wrestlers before the event. They’ll be like ‘look this is where we want this to go’. They might say ‘okay Justin we want you to eventually become tag team champions with your tag partner [Big Rab] so tonight you are going to beat [tag team] Rock Shandy and you’ll have eight to 12 minutes.’

He began his career as the villain. But a meeting with WWE tag team champion Paul London, aka El Gran Luchadore, famous for high risk offensive stunts including signature moves the 450 Splash and Suicide Dive, convinced him that working hard to be the loved protagonist was a better route starting off.

“He was saying ‘I don’t like guys starting out to be bad guys because it’s so much more easier to get hate than to be loved.’ That just clicked with me. So I said I’m not going to take the easy way and became a good guy. I’m a good guy now. I’m one of the biggest good guys there is now. You need to relate to the fans. You need to make them smile. If you can’t put a smile on their face why should they cheer for you.”

He started when he was 14-years-old and has had 40 to 50 matches. Anywhere a ring and seats can be put up around Ireland, they get the crowds in. There are no age group matches and straight away ‘Daniels’ was put in against adults. His second match was against Ciarán, a 31-year-old more than twice his age. Now he’s set on making wrestling his career and he’s working the crowd as the young, new kid on the block, wide eyed and innocent. It plays well with the fans.

“In OTT I’ve lost three times in a row. But I’ve lost because I’m the new lad. I’m the young lad. So wrestling an adult it wouldn’t make sense for me to win. But because I’m young the crowd have so much sympathy for me. They want me to win so bad. You plan the match to tell a story.

“You know it’s like I’m up on him, I’m up on him, I’m about to win and I get cut off and I lose. You are giving them hope and then you just cut it off. They feel bad for me. So when I eventually do win they will be ‘oh my God he won.’ You know the story line but the fans don’t.”

He says it’s about the drama that unfolds and the way the wrestlers tell it. The unknown outcomes and the aerial displays with regular heavy hits and falls are the crowd takeaway. He talks of one match where he acted like he had gone over on his leg and hurt himself. He wasn’t hurt at all but was limping around the ring.

“The crowd were like ‘oh shit it’s his leg. It’s actually hurt’. They are convinced my leg is injured. But I’m determined to keep going. Now the guy is taking lumps out of my injured leg. He’s beating down my leg, beating down my leg. Then eventually I come back and win and the whole crowd have just lost it. Like oh my God he’s just won and his leg is gone.

“It’s not like you ever have to do acting to be a wrestler. But there is an acting aspect like when you are doing your promos and when you are talking to the microphone or talking to the camera. It can be nerve-racking sometimes. But you just have to get it done. It’s part of the business. If you don’t have good wrestling ability and don’t have good talking skills in front of crowds then that’s when you will fail.”

He can go to the top rope and leap onto an opponent or an opponent can hurl himself through the air at him. Either way there’s often a price to pay at the end with a toll of injuries and concussions. Careful body management and ice baths are part of the contract.

“Getting slammed on the ground is very painful,” he says. “The pain is very real but the concept is fake as people would call it.”

It’s a long road and Anene is young. But there’s no head-long rush. He’s plotting his way. It’s not all about getting into one of the big franchises in the UK or Japan or America, although that’s what he dreams of doing.

He explains that it’s more about becoming a valued wrestling asset. He thinks he’ll play the young guy for the next few years. At 16 that requires no acting and there are currently no new young guys hanging up their briefs in The Fight Factory.

“Right now I’m happy with my progress,” he says. “But I want to get better. I truly believe I will get better. When I was 15 I was thinking ‘Jesus I’m not getting better.’ Then I’m looking back and my God I’ve got so much better.

“My wrestling ability, small things that fans wouldn’t know like positioning and even how you get up. I get slammed to the ground, you have to get up to your right. Wrestling in front of a live crowd I was nervous. But now I’m more calm.”

Covid-19 has effectively dimmed the lights and unplugged the mics. But the gum shields, spandex and knee pads are on standby in the fabulous world of the Mushroom Stomp, Spinning Heel Kick, Frankensteiner and Frog Splash.

Faking is a serious business in the ‘Glam Rock’ end of the sporting spectrum. But he’s in there with energy and eyes wide open. Optimistic and ambitious. A kid with a dream. Awaiting The Rapture and WWE ascension.