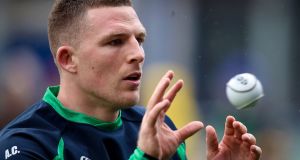 Tomorrow marks three weeks since Ireland’s penultimate Six Nations clash with Italy in Dublin was scheduled to take place - a lot has happened since and life has changed markedly for many. Andrew Conway was likely to line out for Andy Farrell’s side against the Azzurri on March 7th but as it stands his last appearance came in the 24-12 defeat to England at Twickenham on February 23rd. And while he acknowledges the abrupt end to the season was unexpected, this morning he admits he and his professional teammates can cope with the lockdown better than most. He writes: “The following Friday the Pro14 was suspended, but soon you put everything into context, and suspending a rugby season doesn’t begin to be relevant. We take for granted things we have on tap daily, but this pandemic does make us realise how lucky we all are, especially those of us who play sport for a living. It’s unfortunate that it took something like this to make us value it as much as we should. . .We’re privileged.”

Irish language channel and Allianz League rights holders TG4 are making contingency plans with the 2020 competition looking increasingly likely to be scrapped. Last year’s Division One football final between Mayo and Kerry, which Mayo won 3-11 to 2-10, was TG4’s highest viewed programme of the year, with 265,000 tuning in to watch. However, the postponement and probable cancellation of the league will be a big blow for the broadcaster. Rónán Ó Coisdealbha, TG4’s head of sport, said: “We lost the last three weekends of the [2020]Allianz League and, looking back to last year, the league finals in hurling and football were two of our three highest-rating games, so in terms of advertising and commercial income, like any other broadcaster, we’ve taken a hit. The season was suspended just before we were going to broadcast the hurling league quarter-finals. It has a huge impact.”