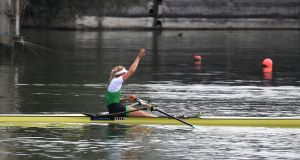 Sanita Puspure was one of the Irish athletes who had qualified for the 2020 Tokyo Olympics. Photograph: Detlev Seyb/Inpho

The National Rowing Centre closed down on Thursday. The Cork training and competition base had been limited to those who were training for the Olympic Games, while club rowers were prohibited access.

However, though the internationals were told to isolate themselves - effectively acting as a family or closed group - there had been complaints from the public, who were able to see crews training from the public road.

Fisa’s Sports Medicine Commission issued a new statement on Wednesday. They said international rowing teams should obey strict rules: “bigger boats like fours and eights are not recommended (if not in strict self-quarantine).”

Ireland’s representative of the Commission, Dr Fiona Wilson, felt that the quarantining of the athletes was possible in the international system. However she was disappointed that some Irish clubs had still allowed activity when most nations of the world, led by Canada, had shut up shop. She would have advised Rowing Ireland to follow this line if she had been consulted. Since then clubs have been instructed to close, but Wilson saw the initial delay as “a missed opportunity”.

The domestic season may yet go ahead on a restricted basis. The NRC will not open until government reccommendations specifically allow it, but after an ‘all clear’ period, Irish clubs could be given the chance to compete.

There is already some strident debate on how or whether this should happen. Schools and universities may not open during the summer months, leaving clubs which operate from these campuses with a disadvantage if the Irish Championships go ahead in the summer or early autumn.