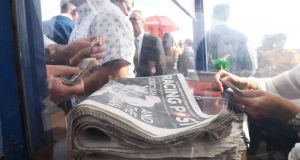 The Racing Post is suspending publication of its newspaper from Thursday due to the impact of the coronavirus pandemic.

With racing suspended in Britain until May, and in Ireland until at least April 19th, the thoroughbred industry’s trade paper has opted to stop publishing for an as yet unspecified period. It is believed the timeframe involved could be in the region of three months.

The Racing Post employs up to 300 people in Britain. In Ireland, where it has offices in Dublin, up to 10 editorial and approximately six commercial staff are understood to be employed full-time. Freelance contributors are also likely to be affected.

A statement by the Racing Post’s London editor said that some of the paper’s team were being “temporarily stood down.”

How many of the paper’s Irish staff that applies to is uncertain.

“Like everyone else the company is facing new challenges at an unprecedented time. There is no racing and no betting shops. We have to take these measures in an effort to secure the long term future of the company.

“We would hope with the support of the government structures that are in place to maintain the staff and hopefully racing will come back in the not too distant future,” said the Racing Post’s Irish editor, Richard Forristal on Wednesday evening.

The decision by the government here on Tuesday to cancel all sporting events, including those held behind closed doors, brought to an end racing in Ireland.

That was the last racing action taking place in Europe after the sport was halted in both Britain and France last week due to Covid-19. The sport is also coming to a halt around the world.

Betting shops closed in Ireland and Britain last week and online betting turnover was reliant on footage from Hong Kong and South Africa.

However, the impact of Covid-19 means that even racing from South Africa won’t be available from Friday as the sport there is also shutting down for a number of weeks.

The Racing Post’s decision will mean even greater focus on when racing might be able to resume in these islands.

1 Diego Maradona dies of heart attack, aged 60
2 Gordon D'Arcy: I know what Joe and Cheika would do. Fix the basics
3 Darragh Ó Sé: Cork and Donegal went out with the wrong attitude
4 Ryan happy to get back to leading by example when Sexton returns
5 Can Solskjaer’s Man United find their groove when it matters?
Real news has value SUBSCRIBE