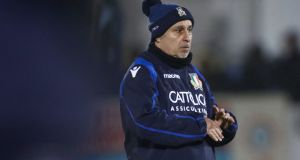 Stephen Aboud is in lockdown in Parma, where we works with the Federazione Italian Rugby. Photograph: James Crombie/Inpho

Italy is in lockdown having been ravaged by the coronavirus, but it must still be eerie to walk down the Strada della Repubblica, one of the main thoroughfares in Parma, without encountering another soul as if personally isolated in some post-apocalyptic film.

Stephen Aboud undertook his daily walk to the local shops from his apartment in the centre of Parma last Sunday and it was only on reaching the supermarket that he realised why he didn’t encounter another person.

The notice on the doors outlined that the shop would be closed on Sundays from now on, something of which he was unaware. It also explained why earlier a Carabinieri vehicle had slowed as it came abreast of him before driving on. He’d a shopping bag in his hand.

Permission is granted to go to the shops or the pharmacy, essential tasks. There is no jogging or cycling, people who drive to the shops carry a permit. No one is supposed to be on the streets otherwise.

Aboud is three years and eight months into his position as head of technical direction for the development of players and coaches with the Federazione Italian Rugby (FIR), having spent the previous 26 years with the IRFU in a variety of guises including elite player development and national coach development.

Parma is his base, his home is in Dublin, where wife Olive, son Denis and daughter Alice reside. He gets back when his schedule allows. There was a window of 36 hours after Italy’s Six Nations game against England was postponed where he could have returned to Ireland but after discussing the issue with Olive he concluded that “it was about me not bringing it home to family, friends and not being a cause of spreading the virus.

“She [Olive] is brilliant, very capable and a wonderful mother; from an emotional perspective that’s very comforting for me.” The death toll in Italy has been horrific although there are signs that the measures taken by the Italian government might take some effect in slowing the rate within the next fortnight. This week there were two days when the numbers declined before rising again.

This focus in Italy now is very much on finding a solution rather than dwelling on mistakes. Aboud continued: “Lockdown is a strategy in dealing with non compliancy. If you look at home there isn’t a lockdown yet because there is an element of hope that people will comply with Government directives. When that doesn’t work you then take away the latitude for the greater good.

“The solution to managing these things is simple but it is not easy. You keep your routine simple, you keep variety in it, you keep up communication with people you care about and who care about you. It’s about being selfless not selfish and in doing so trying to help the vulnerable to survive.

“This virus doesn’t transfer itself, doesn’t have legs or a brain. It’s transferred because we transfer it. That’s where awareness comes in. Every action a person takes is either going to support that [transfer] or work against it. It’s shown that if coronavirus can’t transfer, it can’t survive. We are not fighting the virus per se; we are fighting the people who are not compliant in ensuring that it doesn’t spread.”

Routine provides a skeleton to his day, deviating slightly here and there alleviates the boredom. He breakfasts every morning with Olive via Skype, chats to his family three times a day and in between going to the shops, exercises in the apartment, works, reads, cooks, keeps up to date with the news locally and in Ireland and watches Netflix. He gets up and goes to bed roughly at the same time each day.

“You try and build variety in what you eat, read and watch, a key to avoid boredom. Your brain needs to be stimulated which you can do in the context of a daily routine. You split your day into small pieces. You have to eat well, look after yourself physically and mentally.

“Emotionally it is important to stay connected, reaching out to people and finding what they are doing. That allows you not to become introverted in your outlook. You share their day, their concerns.

Michael Bradley, Zebre’s head coach, lives 10 minutes away. They have known each other since their teens and are friends and colleagues. They haven’t seen each other physically since the lockdown, instead sharing an ‘aperitivo’ most evenings over Skype. Bradley is in the same situation with his wife Gill and family, back in Cork.

In escaping to the shops on a daily basis it briefly opens the valve a little. He’ll try and make sure that he’s out in the air for as long as possible, 10 minutes there and a half an hour saunter home. So how is the social distancing in cluttered human environments? “They are very strict in supermarkets. You might get 20 people allowed in at any one time in a large supermarket.

“Imagine Tesco in Dundrum for example, about 20 people would be allowed in and the rest would queue outside, with gaps of more than the two-metre minimum. Everyone is patient. The supermarket is allowing you to get through, pay for your groceries and get out without bumping into anyone.” Social interaction is limited to phone calls or Skype for the most part.

“This is a long race; it is not a light on, light off scenario. It took a while getting here and it is going to take a while moving on. That depends on how we manage it in Italy. I would hope that in the next seven to 10 days that the stringent policy that has been adopted here is going to be reflected in the statistics. That is the rationale, after all, behind the lockdown.”