What is Fine Gael’s message beyond bashing Sinn Féin? 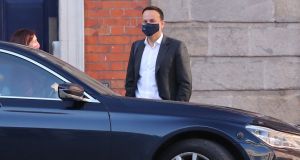 The Leo Varadkar confidence vote debate last week has been rightly characterised as a turning point in Irish political discourse. One wonders how we will turn back.

Jungian psychoanalysis would depict Sinn Féin as Fine Gael’s shadow. Pretty much every basis Fine Gael attacks Sinn Féin on, is an unconscious part of their own identity they cannot recognise in themselves. They attack Sinn Féin on the party’s wealth, as if the pursuit of wealth, and a reliance on wealthy voters, is not intrinsic to Fine Gael.

6 Mary’s story: Roscommon woman believed a lifetime of exile was as it should be

8 Trump prepares to leave for Florida before Biden inauguration

9 David McWilliams: What a Doc Martens boot can teach us about the wealth gap

10 Luke O’Neill: Scientists have delivered against Covid-19. Now the politicians need to

11 Brexit red tape: ‘If nothing changes, Ireland will be closed’

12 Miriam Lord: Why did the secretary general cross the road? Because he’s worth it

14 Pete Lunn: We need to tackle Covid-19 differently after this lockdown. Here is how

16 Covid-19: Nursing homes to be prioritised for vaccination for 10 days amid supply shortage

20 Varadkar: €292,000 salary for top health job likely to lead to others seeking parity

22 AIB plans ‘ethical’ sale of up to 650 distressed mortgages

26 No, you can’t use the bathroom, Jared and Ivanka tell their Secret Service agents

27 Netflix has spent millions on its films, so why are they so mediocre?

28 Maureen Gaffney: The land of the mother and baby homes

31 Meal Box Review: A Chinese takeaway you will never tire of

37 What is Ireland’s plan for vaccinating people against Covid-19?

38 Ireland’s vaccine rollout: ‘There will be bends and bumps in the road’