What difference will the US rejoining the Paris Agreement make? 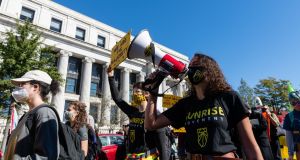 Climate activists march in Washington, DC, during the presidential election on November 3rd. Two-thirds of the American public, including a majority of Republicans, indicate a preference for stronger government action on climate. Photograph: Eric Lee/Bloomberg

Observers of global efforts to combat climate change breathed a collective sigh of relief last Saturday when the US networks called the US presidential election for Joe Biden and his running mate Kamala Harris. Biden has promised a new era of domestic climate action and US climate leadership on the international stage. His election is to be welcomed, but he will face challenges as he seeks to put the US back on track.

The US, and indeed the world, experienced four years of Donald Trump’s wrecking-ball approach to climate and environmental issues. Trump announced in June 2017 his intention to pull the US out of the landmark Paris Agreement on climate change, a promise fulfilled the day after last week’s election.

Trump famously tweeted in 2012 that climate change was a hoax invented by China designed to make US manufacturing uncompetitive, and repeatedly cast doubt on the basic science of climate change. He used executive actions to significantly roll back existing environmental protections. This all matters not just for the US but for the world. As the second-largest emitter of greenhouse gases (after China) and historically the largest cumulative emitter, what the US does matters for everyone.

Biden’s election platform on climate could hardly have been more different to his predecessor’s. He committed to rejoining the Paris Agreement, and to integrating climate change into the US’s foreign policy and national security strategies. This is particularly timely as climate negotiators around the world prepare for the next major climate summit. Originally scheduled for this month in Glasgow, the summit has been postponed until November 2021 due to the Covid-19 pandemic.

On the domestic front, Biden committed to achieving net-zero greenhouse gas emissions by 2050 at the latest, and to a carbon-free electricity system by 2035. He pledged a $2 trillion investment to combat climate change, with a strong focus on job creation. Environmental justice featured prominently in the programme, including protection of communities of colour and low-income communities. There was also prominent focus on protection of workers negatively impacted by the transition away from fossil fuels.

Those on the left of the Democratic Party may have wished for more. Biden’s plan does not go as far as the Green New Deal package put forward by Democrat representative Alexandria Ocasio-Cortez and senator Ed Markey. Nonetheless, it is by some distance the most far-reaching climate platform of any major party candidate for the US presidency. However, Biden will face challenges in bringing his climate agenda to fruition.

International commitments and long-term pledges are the easy part of climate policy. Translating those lofty ambitions into concrete domestic action is significantly more challenging. Democrats had hoped for a blue wave election. Such hopes did not materialise and control of the Senate hangs in the balance. If Democrats win both run-off Senate elections in Georgia on 5 January, the Senate will end up tied, with the casting vote held by vice-president elect Kamala Harris. However, in the relatively likely event that Republicans hold on to control of the Senate, Biden will face a divided Congress.

As part of his platform, Biden pledged to “demand” that Congress enacts legislation in the first year of his presidency that would set milestones and an enforcement mechanism for US decarbonisation targets, deliver historic investment in clean energy and incentivise its rapid deployment. If Republicans control the Senate, the prospect of such legislation seems a long shot.

Bipartisan support may be possible in some circumstances and public opinion research shows evidence of growing bipartisan support for climate action. Two-thirds of the public, including a majority of Republicans, indicate a preference for stronger government action on climate. Nonetheless, a divided Congress would almost certainly hamper Biden’s agenda.

In such circumstances, the Biden administration would resort to executive action to bypass Congress. Indeed, it is anticipated that he will sign a range of executive orders in his first days in office to reverse some of the actions Trump took over the past four years to unwind environmental protections. This was the route Barack Obama used to pursue his climate agenda when faced with a Republican-controlled Congress. There are two challenges to this course of action.

First, it would be open to legal challenge. With Trump having succeeded in copper-fastening a conservative majority on the US Supreme Court, the chances of a successful legal challenge to executive action on Biden’s climate agenda have increased. Second, executive action is by its nature vulnerable to reversal by a future president of a different political persuasion. The need for sustained effort to transition to a sustainable future means that climate action needs to be durable, not fickle.

In this context, the increasing polarisation of American politics is troubling. The final act of Trump’s presidency has yet to play out, and it remains to be seen how far the sitting president will go in undermining the US’s democratic foundations and fomenting further political division between now and inauguration day.

On the international stage, Biden will likely find allies among the European Union and United Kingdom, China, Japan and South Korea, all of which have committed to reaching net zero emissions by 2050 or, in the case of China, 2060. An intensive diplomatic push will be needed over the next year in the run-up to the Glasgow climate summit.

The biggest tragedy is that four years have been wasted. We did not have four years to waste. The longer meaningful climate action is delayed, the steeper the mountain becomes.