The Irish Times view on Nagorno-Karabakh: an enforced truce 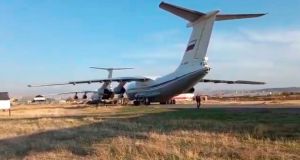 A handout image taken from video footage made available on Tuesday by the press service of the Russian Defense Ministry shows Russian Il-76 military transport planes with Russian peacekeepers and equipment on board after landing at the Erebuni military airport outside Yerevan, Armenia. Russian peacekeepers arrive in Armenia to control the ceasefire and the halt of military operations in the Nagorno-Karabakh conflict zone. Photograph: EPA/Russian Defence Ministry

After six weeks of bloody fighting in which thousands have died, Armenia and Azerbaijan have signed a ceasefire agreement to end the war for control of the mountainous enclave of Nagorno-Karabakh. It will see 2,000 Russian peacekeepers deployed in the disputed Caucasus territory.

Facing substantial territorial losses, Armenia’s prime minister Nikol Pashinyan reluctantly signed a Russian-brokered deal that accepts the new reality on the ground, but he has faced an angry response in the capital Yerevan at what is alleged to be “surrender”. Pashinyan described the truce terms as “unbelievably painful” but necessary due to “a deep analysis of the military situation”. The Armenians were no match for Azeri forces equipped with an airborne fleet of Israeli and Turkish drones that has inflicted major damage on tanks, air defences and heavy weapons.

The region is internationally recognised as Azerbaijani but populated by ethnic Armenians, and large districts extending from Armenia to the enclave have been controlled by Yerevan since the early 1990s. The deal guarantees a land corridor linking Nagorno-Karabakh to Armenia, as well as a staggered withdrawal of Armenian forces from Azeri districts around the enclave.

Baku has the strong support of Turkey, while Russia, the dominant geopolitical power in the region, sought to remain neutral. There were concerns that, unresolved, the dispute would embroil the regional powers in direct clashes.

Although three earlier ceasefires collapsed, Monday’s agreement appears more likely to be sustainable in redrawing the local map in a way that restores Azerbaijan control of lost territories but leaves the enclave substantially intact with the exception of its second city Shusha which has fallen to Azeri control. But the long-term future independence of the enclave is not resolved and will remain a running sore between the two.

Armenia had defied UN resolutions calling for the return of the displaced Azeri residents to the districts lost in 1994. They may now be able to go back to what are largely ghost villages.