Lessons for Ireland in vulnerability of democracy exposed by Trump 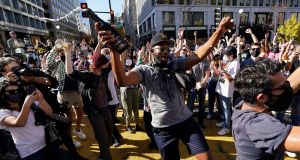 Watching from afar, many of us spent last week in a blue-and-red-tinged limbo also known as CNN, endlessly wandering along the Penrose stairs of “key race alerts”. At times, John King’s “magic wall” slipped me into a meditative state. We don’t know what will happen next, so a better use of time might be to examine how not to fall down an America-shaped rabbit hole, where truth doesn’t matter, propaganda and conspiracy reign, and the more horrendous a leader you are, the less impactful the next egregious move you make will be, even if it’s just as awful as the last.

As a non-American, it’s tempting to consider the last four years as a colossal waste of everyone’s time, energy and headspace. Donald Trump’s presidency was a daily fairground dunk tank, plunging that country and often the rest of the world into increasingly shock-inducing murky waters. As the United States navigates the next 90 days with Trump still in a position of huge power, anything could happen, because anything has happened. For those who disconnected from the news cycle as a means of preserving their sanity and lowering their stress levels, Joe Biden’s election is a reprieve. Perhaps now we can return to paying cursory attention to US politics, and not wake to the sounds of all-caps screaming every day.

But Trump’s ascent and his presidency has to mean something, as does his continuing popularity amongst tens of millions of US voters, who were no longer voting on a wildcard as they did in 2016, and were instead endorsing his chaotic, racist, self-serving agenda. In the background, the largest protests in US history grew – the women’s marches and the Black Lives Matter movement – the latter of which this summer sparked a surge in voter registration which contributed to the Biden-Harris win.

Those four years say an incredible amount about US society. There is no singular narrative, but instead many brushstrokes that paint a portrait of a country that was always divided in multiple ways and still is, primarily along racial lines, as well as a stark urban-rural divide, as King’s magic wall repeatedly showed.

Even in states where Trump won the majority of votes – Montana, Utah, Nebraska, Texas, Louisiana, Arkansas, Missouri, Iowa, Indiana, Kentucky, Tennessee, Mississippi, Alabama, Florida, South Carolina, North Carolina and Ohio – almost every large city in those states had a majority of voters who voted Democrat. There are just a few exceptions where Trump won a majority in cities, including urban areas in the Dakotas, Boise in Idaho, Wichita in Kansas, Tulsa, Oklahoma City by a fraction, and Charleston in West Virginia. It is quite obvious that in the US, living in a city is perhaps the greatest presumptive indicator of how you’re going to vote.

But cities and states don’t vote, people do, and that’s true of everywhere. People vote, not constituencies. People. When we say “It could happen anywhere”, what we should really be saying is: “It could happen to anyone.” To what degree have you inoculated yourself against disinformation? What resentments do you hold that could be preyed upon? In what direction does your anger journey? Do you blame people you’re scared of, or people you hate based on their identity, when they have nothing to do with your personal situation? What are mainstream political parties doing to ensure that civility is sustained, that people’s valid concerns are listened to, their pain paid attention to?

The countries we’re sandwiched between – culturally, geographically, economically – the US and Britain, have shown themselves to be incredibly susceptible to fascistic flavours, and this is not surprising. We may in time view “moderate” politics in these countries as interruptions of a darker reality, plasters on wounds, and perhaps as the exception, not the norm. Contemporary fascism has emerged from late-stage capitalism saturated in unresolved racism. Ireland isn’t magically insusceptible to the neoliberal slide that ends up in right-wing hell. We have done a huge amount of work on social cohesion, but that work needs to continue. So what are our lessons?

Beware the “straight talker”, the “tells it like it is” kinda guy, the “controversial” politician. Beware the political party that seeks to capitalise on division, rather than do the hard work of building consensus and unity. Beware the right-wing fringes of right-wing or centre-right parties who position themselves as edgy and renegade.

Beware the politician who has set their own bar so low that increasingly egregious actions and statements become normalised and are met not with alarm bells that prompt people to say: this stops, right here, right now, but instead say “Sure he’s always at that.” Beware the celebrity candidate, they are almost always driven by careerism and ego, and beware the political party that picks celebrity candidates because all they’re looking for are the cheap seats.

Beware the media that chases contrarians for copy, controversialists for clicks, and sensationalism for soundbites. Beware the journalists who think people are overreacting to worrying trends or extremist protests, no matter how “marginal”. Stop racism in its tracks. Don’t let it fester. Very simply: it never, ever, ever, ends up anywhere good.

Ireland is not the US, although the US is quite Irish. We pay attention to the US more than any other country, so let’s learn from how quickly a supposed bastion of freedom (which is a lie) is barely holding on to its flawed democracy, and ensure our own grip never slips.