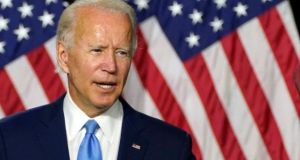 If Joe Biden wanted to make a real difference, he could call the bluff of both Republicans and Democrats, both of which claim to represent the working and middle classes and neither of which really do. Photograph: Carolyn Kaster

It is remarkable how many commentators cling to the idea that everyone who voted for Donald Trump is a redneck racist, despite the fact that Trump garnered more votes than Barack Obama. It is much, much easier to write people off than to engage with them, and the fruits are obvious for the Democrats.

Joe Biden won but as NPR (National Public Radio) put it, it was a good election for Republicans not named Trump.

Despite being egotistical, obnoxious and divisive, Trump managed to give a voice to many who feel excluded and even despised in their own country

The reality is that Democrats are seen in many cases as being the party of the elites and in thrall to “woke” values. Biden may present himself as “Middle-class Joe” but he is a millionaire many times over. His income has not dipped below $200,000 (€169,000) a year since 1998 and in 2017, he earned more than $11 million (€9.3 million). (The fact that we know this is because, to his credit, he has published his tax returns for the past 22 years.)

The immediate response is that if Biden is a millionaire, Trump is a billionaire. Yet despite being egotistical, obnoxious and divisive, Trump managed to give a voice to many who feel excluded and even despised in their own country.

Those who voted for Trump are not homogenous. Nonetheless, there are significant numbers of Trump voters among what photojournalist Chris Arnade described as the “back row” in his 2019 book, Dignity: Seeking Respect in Back Row America.

Arnade uses an old-style classroom as a metaphor. The kids in the front row are the students popular with the teachers, who go to top-class colleges (sometimes on scholarships) and end up in the top law firms, banks, media institutions and tech companies. Mobility is highly valued as is ticking the boxes on progressive values. Arnade himself fits this profile, with a PhD in theoretical physics and a bond trader career on Wall Street.

In contrast, the back row is those who want to stay put, graduate from high school, get a decent job and start a family. Even these modest aspirations are increasingly out of reach.

Arnade, who was battling significant addiction problems, left his high-powered career and spent months living with and chronicling back-row America.

His America is a place of poverty, addiction and quiet desperation. Through candid photos, he vividly illustrates life on the wrong side of the wealth and education divide.

This is a world where McDonald’s offers a kind of cheap, accessible and non-judgmental community centre and where churches offer a place of welcome.

But it is not just back-row America that voted for Trump. The middle rows also feel huge insecurity. Having a child is punitively expensive in a country with ludicrously expensive healthcare, poor or nonexistent maternity leave, and little or no entitlement to childcare.

More poor and middle-class people voted for Biden than for Clinton in 2016, while Trump increased his vote among the rich.

Bruenig also proposes a baby box scheme, not unlike the one Minister for Children Roderic O’Gorman has said will commence in Ireland in late 2021

If Biden wanted to make a real difference, he could call the bluff of both Republicans and Democrats, both of which claim to represent the working and middle classes and neither of which really do.

He could do worse than start with something like Matt Bruenig’s “Family Fun Pack” proposal. Despite its somewhat facetious name, the proposal is designed to make it possible to have children without drowning in debt. Bruenig gives the example of two fictional couples, the Smiths and the Johnsons, who have an income of $80,000. Simply by having two children, the Smiths will have to find half a million dollars to fund their children, including exorbitant college fees, while the voluntarily childless Johnsons remain comfortably off.

The pillars of Bruenig’s approach include a reasonable paid leave scheme along with free childcare, free preschool, free healthcare for children, and a child allowance. Bruenig is ahead of Ireland by suggesting a federally funded but locally-run childcare place for those who wish it, paired with a payment of equal value to parents who choose to stay home. Bruenig also proposes a baby box scheme, not unlike the one Minister for Children Roderic O’Gorman has said will commence in Ireland in late 2021.

The extraordinary thing is that these measures would be revolutionary in the United States but are seen as inadequate to maintain our population at replacement level in Europe. As for funding these proposals, look at the consequences of not funding them – child poverty, family breakdown, homelessness and chronic ill-health are among just some of them.

In the unlikely event that Biden prioritised these initiatives and managed to shame Republican Senate majority leader Mitch McConnell into a bipartisan approach, it would mean that for once, the concerns of ordinary Americans were being recognised and given dignity.

1 Ireland could lose out as France lays claim to most of €5bn Brexit compensation fund
2 Karlin Lillington: How I managed to cut my mobile phone bill by at least half
3 ‘He’s Jekyll and Hyde’: The inside story of an Irish barrister and conman
4 Q&A: What restrictions are going to be lifted next week?
5 Ranelagh’s brand new street with three-beds from €1.325m
Real news has value SUBSCRIBE