Cliff Taylor: Covid-19 vaccine will be shot in arm for economy 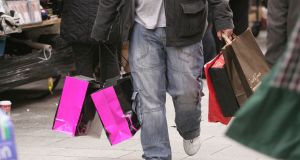 It is vital we find a balance for Christmas which does not involve another widespread shutdown and tens of thousands being laid off again in early 2021. Photograph: Alan Betson

The billions being poured by the Government into supporting the economy and businesses has been, of necessity, a bit of a hit-and-hope operation. The goal has been to try to minimise the long-term economic damage from the Covid-19 pandemic. But as no one really had a clue how the pandemic was going to play out, the huge rescue operation undertaken by governments worldwide has been risky. What if no vaccine emerged and the whole thing dragged on?

It was still the right thing – the only thing – to do. Not acting would have been much riskier. And now the prospect of a vaccine, or more likely vaccines, emerging could start to change the game. The strategy moves from supporting businesses in the hope that something will turn up, to the likelihood that next year science will be able to strike a blow against the pandemic, with all that means for economic prospects. It means the Government should double down on doing whatever it can to help as many businesses as possible to get through this.

Here remember that Budget 2021 was drawn up on the basis that there would be no working vaccine generally available. It now looks like there may well be. Questions remain, of course, and it may not, as scientists are telling us, be a magic bullet. But if it starts to push back against the virus and help in keeping numbers down, it can do two powerful things for the economy.

One will be to allow more of it to stay open safely. I don’t expect we will suddenly arrive at a day next year when this will be “over”. But if we can start to turn the corner, then many sectors will be fully back in business – albeit with Covid protocols continuing – and others will be moving in that direction.

The second key thing will be improving sentiment. It is one thing to be able to go to, say, a restaurant again. But it is another to choose to do so – and survey evidence has shown consistently that the majority of people remain nervous. Improving confidence that Covid-19 is being got under control will slowly build confidence about resuming many, it not all, activities. And better economic prospects – the feeling of some firm ground under our feet – would also help to support consumer spending and business investment.

But there is a sense now that science can mean real progress next year, and most likely not only via a vaccine but also via better treatments and possibly rapid antigen tests. The rest of the EU is looking at Slovakia, which undertook a massive antigen testing programme recently involving two-thirds of the population and uncovering 57,500 new cases and a number of new hot spots. These tests may not be perfect, but that is some result.

It will likely be a slow enough trudge through the months ahead as, we hope, vaccines are rolled out. Many of our big trading partners – the US, the UK and some of the big continental EU economies – are struggling to keep numbers under control and this will hit global growth again as restrictions remain.

Here more tensions are likely between the Government and the National Public Health Emergency Team (Nphet) on the terms on which we move out of Level 5. We still face the risk of opening up for Christmas and closing down in January or February again if we get this wrong. It is vital that this is managed based on hard evidence from here and overseas. We may not like all the answers – but it is vital to find a balance over Christmas which does not involve another widespread shutdown and tens of thousands being laid off for a third time in early 2021.

The really difficult question is what the world will look like in, say, a year’s time. Some stockmarket analysts argue that, even with a vaccine, travel will be slow to return to normal – others suggest that people will be trying to make up for lost time and queueing at the departure lounge.

There are real issues here not only about the economic cycle forced on us by Covid-19 but also about how the structure of consumer demand may change. We may want to spend our money in different ways. People may continue to be wary of crowded indoor spaces for a long time, for example. And there are many others questions with big economic consequences, for example whether employees will all be back in city-centre offices full-time, part-time, occasionally or what? On this issue hinges the future of much of urban planning.

There is still so much we don’t know and so much to debate about the longer-term implications. But moving through next year we can hope that more and more of the economy can stay safely open as vaccines are rolled out and that our lives can go some way back to where they were.

There may not be a tipping point when everything changes. But as the year goes on, we can hope now that the Covid-19 crisis starts to fizzle out. This means things should be better than assumed on budget day. Of course the budget also assumed a UK exit from the EU trading regime without a deal. If a deal is done over the next few weeks – and this is still in the mix – then that would be another big building block towards a better 2021.