The Queen of Connemara – An Irishwoman’s Diary on Bina McLoughlin 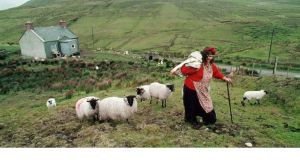 Bina McLoughlin: reached international audiences through her walk-on role as a shepherdess in Jim Sheridan’s 1990 movie, The Field.

Since she was the Queen of Connemara, and her powers and skills in sorcery meant she could put curses on all and sundry, even on such high-flying politicians as Pádraig Flynn.

So after he displeased her over some grave matter regarding animal husbandry in the fields she farmed near Leenane, Co Galway, the late Bina McLoughlin naturally put a mallacht mór on him.

One can only surmise now as to the intention of this curse but since the microclimate around Mweelra means that the weather gods dominate this dramatic landscape, perhaps it was something like, Droch áird chúgat lá gaoithe – that you may be badly positioned on a windy day.

Or worse still, in light of the fundamentals of his trade, it may have been: Imeacht gan do thuairisc ort – that you may never be heard of again.

For those cynics out there constrained by the parameters of rationalism, be assured that the efficacy of her powers were soon to be confirmed when the bould Flynn was sacked from the cabinet by Charles Haughey in 1991 for supporting a vote of no confidence in him.

Fortunately, the colourful Co Mayo politician’s fate was brought back from the precipice after Bina confided in her good friend, Young Dev, aka Éamon Ó Cuív, who being a man of the utmost respect for her powers, entreated her to lift the curse, which she reluctantly did. Lo and behold, Flynn was reinstated by Albert Reynolds and appointed minister for justice in the cabinet of 1992 and, indeed, went on to become European commissioner for social affairs the following year.

It was not only Pádraig Flynn’s star that was in the ascendant though. Bina had already reached international audiences through her walk-on role as a shepherdess in Jim Sheridan’s 1990 movie, The Field.

Unsurprisingly, there was no need for a wardrobe assistant where this character was concerned.

With her multicoloured shawls and ringleted hair, layers of necklaces and rosaries of rings, whether on stage or wandering the stone-walled fields of the wild west, she sure could take on the Bull McCabe any day.

It was soon after this – and again through the intervention of Ó Cuív – that the Queen got her big break in broadcasting and became a regular contributor to Midwest Radio. The Galway West Fianna Fáil TD had rung the station asking for publicity for a fundraiser for a woman who had nearly lost everything after a fire in her little cottage. (Indeed, as the 20th anniversary of her death approaches the iconic cottage, once her home with a menagerie of animals, still stands high overlooking the last stretch of road from Maam Cross into Leenane.

“Is she a good talker?” asked presenter Paul Claffey.

Thus began her many compelling and hilarious contributions to the airwaves about anything from the flaws in the laying patterns of Dillon’s Hens, the brainchild of a one-time Fine Gael minister for agriculture, to her campaign for equal rights for donkeys.

This is how Western People editor James Laffey recalls that early exchange in his book, Magic and Madness: The Midwest Radio Phenomenon.

“But why would you get a grant for an ass?” Claffey asked her on his morning show.

“Well, why would you get a grant for a goat or a sheep or a horse?” Bina McLoughlin retorted.

“Everyone else is getting a grant except the poor oul ass. He shouldn’t be left out. Wasn’t he the Lord’s earliest friend.”

Of course, Bina was not only renowned for her sermons on regional radio. Jesuit sociologist Fr Mícheál MacGréil and the Queen of Connemara were lifelong friends due to their mutual interest and knowledge of the long pagan and Christian history of the Máméan pilgrimage, from rituals around Lughnasa to fairy forts, Mass rocks and associations with St Patrick.

Speaking at the launch of a CD in her honour some years ago, Dr MacGréil recalled how when she was rostered to read one of the Epistles at Mass, she would learn it off by heart and read it with such passion and conviction it appeared as if she had composed it herself. This fascinated the many visitors from abroad who attended Mass in the little church in Leenane during the summer months.

Forced to quell the curiosity of one American visitor, MacGréil explained: “You were listening to the prophet.”

Well, Lord only knows what kind of sermons the late Bina McLoughlin would be giving these days but one thing is for sure she may have resorted to the occasional mallacht mór over such political shenanigans as Brexit and the recent electoral melodramas in the US.

The fact that Donald Trump is the first president of the US in 100 years not to have a pet in the White House may suggest all she would have done is chosen one of her 40 cats and invoked its feline powers, as in, Mallacht mo chait ort – the curse of my cat on you.