We owe James Joyce a final resting place in Dublin

Nora Barnacle wanted him repatriated but was refused. We must right this wrong 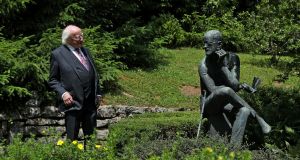 Exile was a key part of James Joyce’s strategy as a living writer. That it followed him into eternity was not part of the plan. Since his death in 1941, there have been periodic hopes that his body would be repatriated. But, eight decades on, the remains of a man who spent his life writing about Dublin are still planted in Zurich.

When Joyce died suddenly in a Zurich hospital on January 13th, 1941, Joseph P Walshe, the secretary of the Department of External Affairs in Dublin, sent a message to the charge d’affaires in Berne, Frank Cremins, asking, “Did he die a Catholic?” while instructing him not to attend the funeral.

The only link with Ireland at the graveside was a green wreath with a lyre on it, sent by Seán Lester, secretary of the League of Nations in Geneva. Joyce was buried in a single grave as his wife, Nora Barnacle, intended to have him repatriated. This was refused by the Irish Government “due to the hostility to Joyce among the Catholic clergy, scholars and politicians”.

It was the repatriation of WB Yeats in September 1948 that raised the matter again in Nora Barnacle’s mind. She did not like living in Zurich and asked Joyce’s literary executor, Harriet Weaver, to put out feelers on the matter concerning her husband. There was a new coalition government in Ireland and she hoped that the response would be favourable this time, with Seán MacBride, who had facilitated Yeats’s repatriation, as minister for external affairs.

A wealthy American bibliophile and diplomat named John Jermain Slocum visited Europe in 1948 on a buying spree of Joycean material. He visited Galway, Dublin, Paris and Trieste. In Dublin he was received by president Seán T O’Kelly at Áras an Uachtaráin.

In Paris he met Joyce’s wife and son. They told him of their strong desire that the repatriation would happen. On his return to the US in November, he wrote a long, perceptive letter to president O’Kelly.

He referred to the recent repatriation of Yeats, asking: “Without discounting the differences between the two men – their different relationships with their country and their countrymen, the difference in their reputation and the love which they inspired – I wonder if it is unreasonable to think that James Joyce might be so honoured someday, and that in so honouring him, his country would be honouring itself? I realise that this proposal is presumptuous coming from a foreigner. I realise that it has probably been made a dozen times by people of widely different tastes and points of view. I do not think that I, or anyone else, could ask for a definitive answer, but if you were to express to me even a belief that such a return of his body to Ireland was possible, I think that I could start his friends in Zurich, in Paris, in London, in New York and even in Dublin, working on it wholeheartedly.”

Joyce had mocked MacBride’s mother and father, dubbing them ‘Joan of Arc and Pope Pius X’

Slocum never received an answer to his letter, as he told Constantine Curran in March 1949. “I have had no answer . . . If you should see him, tell him to get after his secretary. I am waiting for an answer.”

The matter came before government in July 1949. A note on the file of the Department of the Taoiseach dated July 17th reads: “Spoke to Taoiseach. No action.” Unlike his stance in the repatriation of WB Yeats which he enthusiastically supported, Seán MacBride did not support the repatriation of Joyce. He had personal and political reasons for his stance. Joyce had mocked his mother and father at the time of their marriage, dubbing them “Joan of Arc and Pope Pius X”.

Joyce had also snubbed Maud Gonne when she graciously wrote explaining why she was not able to receive him when he called to her home in Paris and inviting him to meet her later. The new government led by John A Costello, like de Valera’s earlier ones, was profusely Catholic. Costello had sent a message to Pope Pius XII on behalf of the government saying “my colleagues and myself desire to repose at the feet of Your Holiness”.

MacBride himself wrote to Cardinal D’Alton: “I should be indebted to Your Grace if Your Grace would say a prayer asking God to give me the wisdom necessary to carry out my new duties well and faithfully.”

I believe that the ‘debt’ President Higgins spoke of could be paid by, at least, a Government offer of a repatriation

There the matter has rested until President Michael D Higgins’s historic visit to Joyce’s grave in Zurich in June 2018. On Bloomsday that same week, he spoke of James Joyce, saying: “We must never forget on Bloomsday the person, the family, and the sacrifices that gave us the groundbreaking literary inheritance that is celebrated all over the world. Ireland owes a debt to James Joyce. Earlier this month I had the opportunity to lay flowers at the grave in Fluntern, where Joyce has rested since 1941, later joined by his wife, Nora Barnacle, and other members of his family. I thanked the Zurich authorities and the gardener who have cared with such sensitivity for his resting place.”

I believe that the “debt” President Higgins spoke of could be paid by, at least, a Government offer of a repatriation.

1 ‘I’ve been sleeping with my girlfriend’s sister. I need help. What do I do?’
2 Ireland among countries urged to consider reinstating Covid-19 restrictions
3 Joe Biden names Kamala Harris as running mate for US election
4 Covid-19 in Ireland: Colour-coded response set to replace phases
5 Stephenie Meyer on Midnight Sun: ‘This was just a huge, pain-in-the-butt book to write’
Real news has value SUBSCRIBE