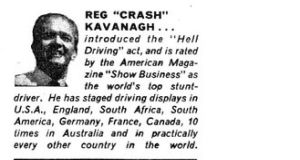 Photograph of Reg “Crash” Kavanagh from a 1962 Australian advertisement for Falcon tyres.

Stunt performers have traditionally remained in the shadows, risking their necks for paltry sums while the big stars enjoy the credit and the fat pay cheques. But there have been a few who have enjoyed successful careers by becoming stars in their own right.

Long before Evel Knievel, in his trademark caped leather jumpsuit, was vaulting double-decker buses on a motorcycle, there was another global superstar of the stunt world, a colourful, cigar-smoking Irishman by the name of Reg “Crash” Kavanagh.

During a stunt career spanning more than three decades, Kavanagh travelled the globe, crashing motorbikes, cars and planes, and breaking nearly every bone in his body, in front of packed-out stadiums from Brisbane to Buenos Aires. In the 1930s, the name of “Crash” Kavanagh, heralded in newspaper columns as the “crazy” Irishman, was synonymous with the automotive stunt show, a wildly popular new form of entertainment.

Kavanagh drew up a price list of stunts which his eight-man team would perform: crashing a motorcycle into a wall cost £25

Like Knievel in the 1970s, Kavanagh understood the importance of his own myth and many of the details of his life are shrouded in mystery. According to an article he wrote for a British tabloid in the 1950s, he was born in Dublin but left Ireland with his family at the age of two, bound first for the United States, and then Kilburn. His father was “a real tough character”, a boxer and motorcycle enthusiast; his mother was the one who kept the family going.

Reg ran away to sea when he was 12, before working as a boxer. He joined a boxing circus in London in the 1920s, fighting aspiring locals in provincial towns for a weekly salary during tours of Europe, the US and Australia.

After the owner of the circus went bankrupt, Kavanagh got involved in motor-racing in Australia and the US, first working as a mechanic and then as a driver at car races held at country fairs.

His stunt career began in the late 1920s when he signed up to parachute out of a plane at 2,000 feet at an air show in Adelaide.

Returning to England in 1928, he raced bikes in the newly popular speedway races in West Ham Stadium and rode the Wall of Death in Southend. For the next few years, he rode speedway in South America and Europe. In Barcelona, mounted on his Douglas motorcycle, he fought a joust with a bull.

In the 1930s Kavanagh drifted away from speedway, and, after witnessing an air acrobat in Germany, developed an interest in wing-walking, performing stunts for air circuses and the movies.

Such was his success that he put together his own stunt company. Initially nicknamed the “Death Squad”, it later became known as the “Reg Kavanagh Film Crash Squadron”. Kavanagh drew up a price list of stunts which his eight-man team would perform: crashing a motorcycle into a wall cost £25, crashing a plane into the sea was £75, and a mid-air crash between two planes set one back £250.

While attempting to drive a car through a hoop of flames, his head caught fire and he was badly burnt. His face was disfigured for a couple of weeks

One of the first contracts offered to the company was to stage a car crash in the 1935 film Bulldog Jack, starring Jack Hulbert, Fay Wray and Ralph Richardson. Kavanagh was left with a black eye after the stunt and self-consciously refused to have his picture taken with Wray, one of the most famous movie stars in the world at the time after her turn in 1933’s King Kong.

Contracts followed for stunts in No Limit (1935), a George Formby vehicle set during the Isle of Man TT races – in which Kavanagh doubled for Formby – a spy thriller called The Crouching Beast (1935) and the crime film The Crimson Circle (1936).

Despite these early successes, film work did not prove lucrative and Kavanagh began concentrating on touring shows featuring car and air crashes.

By this stage, the late 1930s, Kavanagh was becoming well-known in Britain. There were regular features in magazines and the newspapers and he appeared on the early BBC radio show In Town Tonight.

In the spring of 1938, Kavanagh put on three shows in Clontarf as part of fund-raising efforts for the construction of the National Stadium in Dublin. While attempting to drive a car through a hoop of flames, his head caught fire and he was badly burnt. His face was disfigured for a couple of weeks but the burns proved superficial and he recovered.

Kavanagh toured South Africa, South America, the United States and Australia for much of the next two decades, becoming a bona fide celebrity, the self-described “World’s Highest Paid Stunt Man” and “The Man Who Can’t Die”. When not crashing cars or planes, he judged beauty contests, was photographed in London nightclubs by tabloid photographers and advertised everything from petrol to cigarettes, tyres to service stations.

By the 1960s, however, his celebrity was on the wane, and he made way for a new generation of performers, including the aforementioned Evel Knievel, who, without acknowledging it, owed much to the trailblazing exploits of the Dublin-born stuntman.