Austen Ivereigh has produced an unusual collaboration with Pope Francis 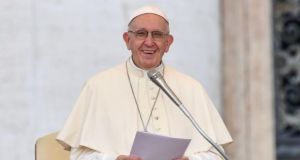 A couple of weeks into the original lockdown, an unusual amount of time on our hands led to a lot of reflection about how we were living our lives and what we value. Some people were even brave enough to suggest that the pandemic might mark a turning point in our relationship with the planet.  That reflective spirit has in most cases been replaced by one of querulous weariness with Covid-19 restrictions.

A new book, Let Us Dream – The Path to A Better Future, may be timely, therefore, as a reminder that disenchantment, while understandable, will not help to solve the problems facing us.

Although Pope Francis and British writer, Austen Ivereigh, are listed as co-authors of the book, it was a highly unusual form of collaboration.

It is the fruit of a unique process, with Ivereigh distilling Francis’ recorded answers to questions

The only other books that I can think of that are in any way similar are Pope John Paul II’s 1994 book, Crossing the Threshold of Hope, with the Italian journalist, Vittorio Messori, and Peter Seewald’s books with Pope Benedict, Light of the World and Benedict XVI: Last Testament In His Own Words.

But all three of those books are ultimately book-length interviews in which the co-author is present as the respectful interviewer posing questions and the Pope’s contribution remains as he originally wrote or spoke it.

Let Us Dream is different, in that Ivereigh’s own voice is not heard directly at all until the end of the book. It is the fruit of a unique process, with Ivereigh distilling Francis’ recorded answers to questions, some of the Pope’s writings both published and unpublished, and even the occasional phone call, and then re-submitting them to the Pope for final editing and approval.

Ivereigh structured the book as a three-part framework loosely based on Cardinal Joseph Cardijn’s “see, judge, and act” methodology, or in Pope Francis’ terms, contemplate, discern, and propose. Both frameworks are rooted in observing the reality around us, making careful decisions about the best way to move forward and then, acting.

High-flown reflection alone will not put bread on the table of the poor. The whole thrust of the book concerns efforts to reform our world so that the concerns of the poor are central to the way we conduct politics, religion and economics.

Ivereigh admits that he pushed Pope Francis to reveal more personal matters than he has done in the past. Pope Francis has always been comfortable with anecdotes revealing the importance of say, his grandmother or his favourite primary school teacher, but in this book, he talks about three experiences which shaped him, all of which reflect a quality akin to the shock of Covid and lockdown.

The first was almost dying of a lung infection when he was 21, which led to the removal of the upper part of a lung. The second was being displaced in Germany, a stranger in a strange land, when he studied abroad in 1986. (Thank God he did not say that it was studying English with the Jesuits in Milltown in 1980).

The final one was the almost two years he spent in Córdoba in Argentina when aside from going to the post-office, he scarcely left the house. It came about when his own Jesuit province “ sent [him] off the soccer field and put [him] on the bench” as Francis says.

He admits that while he may have done some good things, first as the Jesuits’ novice-master and then as provincial, he ‘could be very harsh’. For someone who had been at the centre of Jesuit life, this quasi-exile was a painful but productive time of introspection and prayer which only ended when the then archbishop of Buenos Aires asked Pope John Paul ll to make Jorge Bergoglio an auxiliary bishop.

When it comes to new thinking for a new era, it is striking how often Francis mentions women throughout the book. He mentions, in particular, Kate Raworth, author of Doughnut Economics and Mariana Mazzucato, author of The Value of Everything.

Both women have been involved in Vatican conferences on the economy. He says that his concern is not to assess their theories as he is not qualified to do so, but he sees in them “thinking that is not ideological, which moves beyond the polarization of free-market capitalism and state socialism, and which has at its heart a concern that all of humanity has access to land, lodging, and labour.”

The book proves once again that left-right political categories are not useful, either when it comes to Francis, who is as quick to speak about “the 30 to 40 million lives lost every year through abortion” (WHO figures) as he is about the “child abandoned in the streets; the underage sweatshop worker who rarely sees the light of day; the worker dismissed because his company has been asset-stripped to generate dividends for shareholders; the refugees denied the chance to work; [or] the elderly abandoned to their fate in underfunded care homes.”  Short enough to be read in a single sitting, Let us Dream is an important contribution to beginning to “slow down, take stock and design better ways of living together on this earth.”