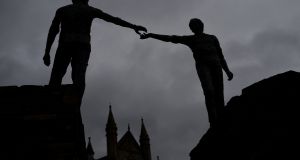 A silhouette of the Peace statue entitled Hands Across the Divide in Derry. Photograph: Clodagh Kilcoyne/Reuters

Last week saw more than 80 young people across the North and South participate together in the first instalment of the Shared Ireland Dialogue. The event was the first in a series, serving as one of the major works proposed by the Shared Island Initiative in the Department of the Taoiseach. I contributed alongside two other panellists, on the topic of “building understanding and connection”, of which one key issue was repeatedly raised – education.

Segregated education continues to dominate the school systems in the North, in tandem it seems with segregated history. Earlier this year a survey by Parallel Histories (a charity that aims to find new ways of teaching about recent conflicts) revealed a disparity between which period of history is being taught in Northern secondary schools divided down religious lines.

The survey highlighted that the vast majority of Catholic schools teach the years 1965-1998, covering subjects from the civil rights movement, to the Troubles, and culminating in the Belfast Agreement. By contrast, just under half of “Protestant” schools – defined by the survey as those “with a Protestant denomination or controlled by the state rather than by the Catholic church” – teach a history curriculum focused on 1920-1949 instead, sidestepping the decades-long struggle for peace and reconciliation which created the institutions we live under today.

Education serves not only as a fundamental pillar of academia, but also as an introduction to the basic principles of society and social norms

This dilemma raises the question: How can we expect our children to grow up free from sectarianism if they’re being taught two different versions of our shared history?

In response to the survey, Dr Alan McCully, president of the History Teachers’ Association of Northern Ireland, stated: “The reality is that schools from Protestant backgrounds have been switching to the later Troubles period over time as the political situation has evolved.” However, any inconsistency surrounding the manner in which history is taught in a post-conflict zone – particularly a disparity which perpetuates the divisions of said conflict – cannot be deemed acceptable. A comprehensive, joined-up approach to learning leads to better outcomes, and in a divided society, better overall relations shouldn’t be limited to Northern Ireland but rolled out island-wide.

In 1998, there were 11-year-old schoolchildren reading the text of the Belfast Agreement in class due to the extraordinary significance and importance of its pages. At some point, that enthusiasm for the landmark agreement began to wane, taking along with it any consistent representation in our educational systems. Those 30-odd pages which were sent to every household on the island of Ireland are now abbreviated into a few brief explanatory pages in a textbook.

In the Republic, the Belfast Agreement still features prominently for those taking politics and society – a unit which was introduced in 2018 at Leaving Certificate level. For all others, it’s still covered – rather sparsely, however – in history courses at Junior Certificate level. Anyone who wishes to read the landmark international peace treaty responsible for bringing peace to Northern Ireland and seeing Ireland amend Articles 2 and 3 of the Irish Constitution in its entirety must actively seek it out.

Education serves not only as a fundamental pillar of academia, but also as an introduction to the basic principles of society and social norms. A joined-up approach, North and South, in teaching our shared history – including the Belfast Agreement – can only foster better understanding and reconciliation.

Education remains a wholly under-utilised tool in tackling sectarianism. That over two decades on from the Belfast Agreement, there are still young people in the same community growing up who might not ever interact with a member from another background until they go to university strikes me as a great failure.

Young people are the future, but how can we expect them to create the future envisioned in the Belfast Agreement without teaching it to its full extent

Politics has historically moved at an almost glacial rate in rolling out integrated education in Northern Ireland, leaving progressive steps in this process to individually motivated parents, teachers and grass roots organisations. But there may be hope yet for politically-driven change catching up to public demand. Maurice Bradley, a DUP member of Stormont’s education committee, recently stated that all schools in Northern Ireland should be integrated.

As is so often said, young people are the future, but how can we expect them to create the future envisioned in the Belfast Agreement without teaching it to its full extent? There are, thankfully, many young people who have read the Belfast Agreement in its entirety, as evidenced by many of the young participants who contributed to the Shared Island Dialogue. But that drive is often evident in those who already hold an interest in politics and human rights to begin with. As a reflection of the diverse communities across the island of Ireland, that demographic should be much broader.

The controversy and upset caused when Sinn Féin TD Brian Stanley posted a tweet about the Kilmichael and Warrenpoint atrocities highlights the negative consequences that can come from segregated education.

We have, in essence, three different versions of our shared history being taught on the island, to varying degrees, facilitating and embedding different narratives. It would seem only logical that such disparity leads to a disconnect between our citizens.

Brian Stanley has since apologised for the tweet. Nevertheless it raises an important question over how we understand our past and present. A common curriculum on history would be hard to realise but the gains of such a collective approach would surely be worth the effort.