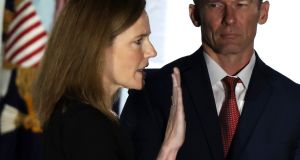 Amy Coney Barrett is sworn in as a US supreme court judge as her husband Jesse Barrett looks on on the south lawn of the White House on October 26th. Photograph: Alex Wong/Getty Images

Of all the attacks on Amy Coney Barrett, newly confirmed to the US supreme court, the onslaught on her childcare arrangements is the most bewildering. For example, a Washington Post headline asked accusingly this week: “What’s Amy Coney Barrett’s childcare secret? Moms need to know”. The gist of Caroline Siegrist’s article is that Coney Barrett’s allegedly vague answers about childcare are “hurting moms in America”.

She believes that it is not possible for Coney Barrett to have succeeded in the way she has without “consistent, high-quality childcare” which to Siegrist apparently means having a nanny.

The odd thing is that Siegrist’s article describes what Coney Barrett has told us about her childcare arrangements. Far from obscuring how she does it, Coney Barrett has told us exactly how she does it, including that her husband Jesse’s aunt has provided consistent childcare for over 16 years for them. She and her husband share parenting and since she became a judge three years ago he does more of the cooking and more of the endless ferrying that is part of life in a big family.

She has also been open about how much heart-searching she and her husband have gone through every step of the way, including whether she should stay at home or work part-time. She has been clear that she could not do what she does if she and her husband did not have well-paid careers in the law and academia, which allow for flexible working practices.

Most parents would accept that children who are adopted or who have a disability need particular care. She and her husband debated whether they could go through with the adoption of her son from Haiti, John Peter, who was then three years old, when she discovered that she was pregnant again.

She has been equally open about the fact that while some families can take in their stride having a child with Down syndrome, that was not the case for her when she had her son Benjamin. She makes no attempt to present herself as a paragon of parenting.

Yet the Washington Post article thinks Coney Barrett is “hurting moms” while Harper’s Bazaar believes she is gaslighting them, that is, lying to and psychologically manipulating someone until they begin to doubt their own sanity.

What has Coney Barrett done to deserve this, according to writer Lydia Kiesling? Well, she brought some of her children to her supreme court confirmation hearing. This is gaslighting because it “cements the myth that childcare and work-life balance in America are essentially private and individual challenges to navigate – challenges that needn’t stop a woman from attaining the highest professional achievements”.

My head hurts. Coney Barrett’s problem is that she apparently can navigate having both a family and high professional achievements? I thought that was what feminism aimed for?

I can understand some of Kiesling’s frustration because she lives in a country with “no guaranteed paid leave, very little public childcare or preschool, costly and terrible health insurance”.  But why is that Coney Barrett’s fault? Her childcare arrangements do not differ that much from Ruth Bader Ginsburg’s or the Obamas. The latter moved Michelle’s mother, Marian Robinson, into the White House.

Agreed, it was even more challenging for Bader Ginsburg because she was attending law school as one of nine women among 500 men. But she managed to study all day because she employed a motherly, New England woman who looked after her daughter Jane. Her much-loved husband, Marty, was unusual in that he shared the care of their two children after he recovered from cancer. He also did all of the cooking.

Coney Barrett has paid humble tribute to the trailblazing carried out by Bader Ginsburg and Sandra Day O’Connor by being both mothers and supreme court justices, even though their children were much older when they took up that role.

And yet Coney Barrett is despised. No matter how brilliant or how accomplished a woman is, no matter how well she realises the feminist dream of shared parenting and household work, she is not a worthy woman unless she embraces abortion.

Instead of references to The Handmaid’s Tale (where Margaret Atwood writes about the particular oppression of Catholics by the State religion, the Sons of Jacob) perhaps feminists should reread Animal Farm. They could substitute the word women for animals in Orwell’s sardonic slogan: All women are equal but some are more equal than others.

Coney Barrett’s ability to juggle family and professional life is not a testament to individualism but instead a tribute to deep-rooted nurturing networks. These networks were once highly valued by feminists as a counterbalance to patriarchal values which denigrated caring work.

Here, research for the 2017 action plan on school-age childcare showed that two-thirds of children between eight and 12 wanted to be minded at home after school, followed by another 30 per cent who wanted to be cared for in friends’ homes or by relatives.

Certainly, the Coney Barretts are privileged as professionals to be able to provide that for their children but they are not the ones harming or gaslighting mothers who would like to be able to do the same.