Analysis of complications in women and trauma of foeticide specialists vital 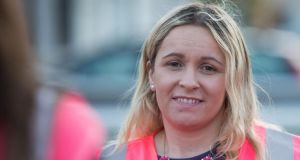 Deputy Carol Nolan: Her parliamentary question revealed there is no national reporting service to record significant adverse outcomes, including hospitalisation, for women who are prescribed abortion medication. Photograph: Tom Honan.

So many questions, so few answers, so little media interest. There is scarcely any desire to interrogate any aspect of Ireland’s abortion regime. Instead, we have many cheerleaders seeking only to expand access to it.

This column has featured before the tragic case of baby Christopher, who was aborted in the National Maternity Hospital although he was completely healthy. His parents were more than willing to parent a baby with profound disabilities but they say they were told there was no hope of survival. Despite having a normal scan, they allege they were informed the preliminary tests were conclusive and incontrovertible. Any further tests, including amniocentesis, could not change the diagnosis of so-called fatal foetal abnormality. (The humane term is life-limiting condition.) Yet Christopher had no abnormality at all.

The termination happened in March 2019 and his parents still have not received the answers they so desperately need. How was it possible for such a catastrophic event to occur? Why were they left to figure out for themselves what had happened? Why has obtaining their own medical records from Holles Street been a marathon battle? What safeguards, if any, have been put in place to prevent it happening again?

Christopher’s parents are pro-choice and therefore feel even more abandoned. In voting for repeal, they thought they were voting for something which would honour informed consent and good medical practice, not something which would deprive them of their own child. They are intelligent, articulate, well-informed people with exceptional tenacity and courage. How many other cases have there been where people did not have similar resources with which to pursue the truth?

We have no idea because our data collection on abortion is a travesty. Proposed amendments at the time of the initial legislation would have brought our information collection into line with the UK, New Zealand and most western European democracies.

These amendments were not only rejected, but former deputy Kate O’Connell stated the amendments were only about “power, control over women, shame and surveillance” while Deputy Brid Smith called them “malicious and vindictive”.

Kate O’Connell stated the amendments were only about `power, control over women, shame and surveillance'

Deputy Carol Nolan and Deputy Peadar Tóibín have continued the courageous but thankless task of trying to establish accountability. Tóibín continues to press for answers for Christopher’s parents.

A parliamentary question by Nolan revealed there is no national reporting service to record significant adverse outcomes, including hospitalisation, for women who are prescribed abortion medication.

Another of her parliamentary questions established that the Health Service Executive is unable even to provide numbers of patients who received post-termination-of-pregnancy care in hospitals due to complications such as failed abortion, persistent bleeding and/or heavy bleeding and management of pain.

The annual report of the Irish Family Planning Association (IFPA) shows that 4.5 per cent of women receiving abortion pills from the IFPA experienced complications and were referred to hospital for treatment. These are not insignificant numbers. *

If the State were serious about women’s health, recording and analysing information like this on a national level would be a priority.

Carol Nolan also discovered that, in 2019, €2.9 million was paid in fees to all no-hospital providers of abortion. The figures do not include hospital terminations. To put that in context, the entire budget for the National Women and Infants Health Programme in 2019 was €3.1 million. Yet again, the provision of abortion is prioritised over other services for mothers and babies.

There is also little media interest in reports of medical professionals who say they are traumatised by abortion procedures. Research by University College Cork among foetal medicine specialists describes a specialist being sick in the corridor after carrying out foeticide (usually a lethal injection into the baby’s heart before an abortion). The specialists described foeticide as “‘brutal’, ‘awful’ and ‘emotionally difficult’, referring to it as ‘stabbing the baby in the heart’, and held themselves responsible for the death of the baby: ‘I caused the death’.” Almost all of the foetal medicine specialists justified providing termination of pregnancy for fatal foetal abnormality, or foeticide, because it was a “kindness in some cases”.

Their instinctive revulsion for something which they experience as brutal and awful, despite presumably being pro-choice, should raise questions for the rest of society about something hailed as allegedly progressive and humane.

The UCC research also reported conflicts with neonatalogist colleagues. Such conflicts resulted in foetal medicine specialists being “‘unclear as to who will look after those babies’ if a baby is born alive following termination of pregnancy by induction of labour and without foeticide, resulting in them ‘begging people to help’ them in providing palliative care”.

A baby being aborted who was perfectly healthy, no proper accessible records of adverse events, medical professionals traumatised by delivering death to babies and worrying about having to beg for palliative care for babies born alive after abortion – is none of this worthy of sustained public interest and investigation?

*This article was amended on December 3rd 2020