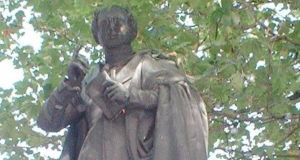 Myles na gCopaleen took a dim view of the Thomas Moore statue, “the terracotta monstrosity which dishonours the name of a decent little versifier”

At least under his own by-line, Myles na gCopaleen was suspiciously quiet during the great Irish Times letters row of 1947, as discussed here last week (Diary, November 27th). But he was drawn into the fray at least once, at the height of the verbal violence, to defend himself against an allegation that he was the true author of the article that set it off, a revisionist broadside at the expense of Thomas Moore. As readers may recall, that was the work of Dr Alfred Byrne, a former medical correspondent of this newspaper and later of the Sunday Times, who was an old friend of the real-life Myles, Brian O’Nolan, and had been one of his co-conspirators in an earlier letters saga, using the name “Lir O’Connor”.

In this case, he had written the anti-Moore essay under his real identity, or at least as “A.T. Byrne”. And the suggestion that this was a front for Myles did not arise in these pages. The letters conflagration had by then spread to Belfast, where it consumed a columnist with the Irish Weekly and Ulster Examiner, one “Dom Francisco”, who was annoyed at the comparative underreporting in the Dublin press of the opening of an exhibition on Moore’s life by taoiseach Éamon de Valera.

As quoted by Myles, he thundered: “Abundant space, however, was given in [one] morning journal to a writer whose vulgarity betrays his identity. Surely the readers of that newspaper have been sufficiently bemused by this gentleman’s puns and alleged humour to have been spared this ‘delight in his own dirty dexterity’ as Stephen Gwynn aptly describes this latest diatribe […]

“[It] will doubtless occasion amused comment amongst the faithful of his social congeries but we venture to doubt even their silent approval of a ghoulish rifling of graves where two poet friends had hoped to find sanctuary.” [The “two poet friends” were Moore and Lord Byron, on whose odd-couple relationship Byrne had cast doubt.]

'Prison' had been confused with one its dictionary neighbours, leading the magazine to argue that 'poison’s the only thing to stop careless driving'

In print at least, Myles’s outrage at being fingered for the Moore job was of the mock variety. “Well, congeries, what do you think of that?” he wrote in his Cruiskeen Lawn of March 24th, 1947. “Isn’t it a terrible thing that this northern clergyman should so cruelly dash my Eminence, imputing to me without inquiry writings not of my pen [and] deluging upon me the citrus fluids of passionate rebuke […] O uncharitable, most cruel!”

Mind you, he did also draw the Belfast columnist’s attention to a misprint from a then recent issue of English Digest, wherein the word “prison” had been confused with one its dictionary neighbours, leading the magazine to argue that “poison’s the only thing to stop careless driving”. The same might apply for careless writing, Myles suggested ominously.

The hint appears to have been taken. On March 27th, The Irish Times published a letter from “Dom Francisco, Co Down”: “I beg to make unreserved withdrawal of the rash imputation that Myles na gCopaleen was author of the recent diatribe against Thomas Moore, and offer sincere apologies to himself and his ‘social congeries’ for the ‘citrous fluids of passionate rebuke’ which my unwarranted suspicion let loose.”

His suspicions might have been more warranted had they been pointed at some of the letters that Byrne’s essay provoked. Not just that of “Zozimus Muldowney”, mentioned last week, but also the one from “Breffni”, which appeared on March 17th.

Along with some typical Mylesian asides, that included a characteristically back-handed compliment to the idea of a Thomas Moore Society, viz: “If it existed for the sole purpose of inciting its more stalwart members to bring sledge-hammers to College Green and make smithereens of the terracotta monstrosity which dishonours the name of a decent little versifier, it would not only justify itself, but it would gain rounds of applause from the citizens of Dublin.”

Connoisseurs of the spoof letters of O’Nolan and his “congeries” might have cautioned Dom Francisco that “A.T. Byrne” was in any case a bit on the prosaic side for a cover name. For all its excellent punning potential, especially in variations of people fiddling “while Byrne roams”, it is just too common in Ireland.

Indeed it was Alfred Byrne’s double misfortune that he was known to friends as “Alfie” in an era when another colourful Dubliner – 10-time Lord Mayor Alfie Byrne – had a near-monopoly on that formula. There was hardly room for two of them in the same town. This may or may not have been a factor in Dr Byrne’s decision to emigrate to London, where he became, in the words of our 1971 obituary, “one of the foremost medical journalists in Britain”.