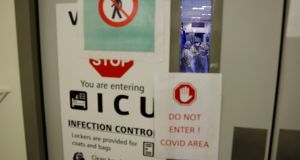 A view through the door into to the Covid ICU (Intensive Care Unit) at St. Vincents University Hospital.Photograph: Alan Betson / The Irish Times

Much of the commentary by civic, political and other authorities is a double cause for concern. Firstly, it probably is a manifestation of their own lack of understanding of Covid realities. Secondly, it ramps up the panic factor in the community; e.g., referring to the Spanish Arch incident as having the potential of an atomic bomb is reckless and irresponsible.

Similarly irresponsible and reckless is the use of national airwaves to advise citizens to treat their nearest and dearest and best friends as their worst enemies. This is hardly appropriate advice to young people who are already very apprehensive and struggling. Equally irresponsible is the HSE reporting that the Intensive Care Units in four of Dublin’s six major hospitals were overwhelmed when the total number of Covid-19 patients in the four ICUs was 12, less than each had on many occasions during the spring peak. At this time of year one would expect that number of flu patients in ICU.

Media commentary also serves to promote and perpetuate the scaremongering with newscasts leading with daily case numbers. The vast majority of whom are totally unaffected by the viral presence and a  primary consequence* of which is a positive; i.e., immunity for them and added safety for their at-risk relatives and friends. The two principle scare tactic weapons are “Cases” and “Mortality”.

What is a “case”? Up to very recently when discussing infective respiratory illness and in particular influenza a “case” was an individual who was diagnosed clinically (by doctors), i.e., based on symptoms and clinical examination. Never before were asymptomatic individuals tested for the flu virus. The present practice of labelling completely asymptomatic laboratory test positive individuals as “cases” is a radical development. The use of this data for policy decisions is seriously questionable.

In early March there were predictions of Covid-19 deaths in excess of 80,000 for the Republic of Ireland. The World Health Organization Bulletin on October 15th 2020 published a report by the highly respected Stanford research expert Dr J Ioannidis which reports an overall Infection Fatality Rate * of 0.27 per cent. This is based on antibody studies from around the world. Furthermore, the WHO official, Dr Mike Ryan recently stated that at the WHO’s best guess about 10 per cent of the world population, 750 million have been infected with Covid-19; the WHO estimates 1.04 million have died from C-19; this makes a mortality of 0.1386 per cent. Strictly, this should be called the Infection Fatality Rate (IFR).

Rather than speculate as in March we can now be confident that mortality at worst will be 10 per cent of the March prediction. Yet we appear to be using the same modelling process which created the March prediction which was out by 1000 per cent (yes, a thousand). Unfortunately, it’s easier to fool people than to convince them that they have been fooled (attributed to Mark Twain)

We can only assume that Nphet have convinced themselves and Government that there is a vaccine around the corner and that the problem will go away as did small pox. The reality is likely to be very different. There have been a couple of vaccine false dawns but a vaccine is a definite possibility; however, when will it be available ? For how many ? And most importantly, what will be its efficacy ? The reality of respiratory virus vaccines is that they are rarely more than 50 per cent effective. This leads to a question the answer to which dictates strategy. Are we happy to continue with the present war time curfews and restrictions for six, nine, twelve or more months in the hope of a vaccine arriving with the potential of reducing the mortality from 0.25 per cent to 0.125 per cent ?

The Taoiseach has passed on the Nphet message that if we behave ourselves we can have Christmas; the sad reality is that there actually is no Santa Claus and even more sadly not even Nphet can restore the jobs, pay the mortgages, open the small businesses or restore the physical, mental and social wellbeing of society; ironically this is the role of Public Health Care!

The rationale for Lockdown

Projects fail for many reasons, a principle one being the setting of unrealistic goals. The accepted world scientific opinion is that this virus cannot be eradicated once established. That it could be eradicated in the Republic of Ireland or the Island of Ireland is about as unrealistic as goals can get.

The WHO has stated that lockdown should not be the primary means of controlling this virus*; if you want different results than what you’re getting, you have to try different approaches. The definition of insanity is doing the same thing over and over again, but expecting different results (Einstein, apparently). European countries, many with much higher rates of infection than Ireland, are not going to lockdown. The German Chancellor has ruled out National lockdown and adopts a local or regional approach.

What precipitated lockdown at this particular time is a complete mystery. I use Dublin data as it had the highest pro rata incidence during March and April. The number admitted to hospital in Dublin increased slightly over the past 4 weeks but the number in ICUs has not changed, when the average total number in Dublin ICUs was 13; compare this to the average total number of Covid-19 patients in these ICUs for each of the 7 days from 8th- 13th April which was 78, i.e., occupancy is now 16 per cent of what it was. How this justifies pressing the panic button needs to be explained, and now!

Life is not a video game which we can freeze-frame and restart when and vaccine arrives. All living is being suspended but unfortunately all life time is passing even for those with six months or a year to live with or without Covid-19.

Finally, there is one significant implication the present strategy which is in the “Appalling Vista” category. Apologies for going back to 2017-18 flu season but, the HSE published (December 2018) the recorded data which showed a mortality (CFR) of 2.14 per cent; that is almost 10-fold higher than for Covid-19. Undoubtedly, this is an overestimate but there was a vaccine.

So, the question is this; whenever there is influenza with a similar virulence to 2017-18 (every 5-10 years) or very severe (every 40-50 years) are we going to lock down the country for 6 months including schools as the children will be chief vectors? The implications for society and the health service don’t bear thinking. It really is time for a mature discussion on the realities of life and nature.

4 Air pollution in Dublin reaches back to smoky coal days